20 Dangers In Australia May Get You Killed Australia may be many people’s favorite vacation destination, but it’s also home to some of the most lethal species to humankind. If you want to plan a trip simply for cuddly koalas, you need to hold on a minute. Prepare yourself first and read this list of the 20 most dangerous things in Australia, before making any decision. Box Jellyfish can be found in Northern Australia, most commonly from October to May. It has one of the most painful stings in the world and can be fatal to humans. It’s almost transparent, which makes it very hard to spot in the water and even more dangerous to swimmers. Don’t get fooled by its goofy looks as the cassowary is definitely one of the most dangerous birds in the world. Living in the Australian rainforests, this gigantic bird can hurt you with a simple kick. They can run at 31 mph, jump to five feet in the air, and they can even swim. Since there is no way to escape, it’s better not to piss them off. As long as you don’t touch them, they are fabulous creatures to see in the water. But if you accidentally do, you may get a highly venomous bite. Its deadly sting makes your whole body shut down, paralyzed, and finally causes dyspnea. Although treatment is possible, there is no specific antivenom yet. Don’t be tricked by their size as they’re big enough to kill you with a sting. They’re even more dangerous than other jellyfish because they have stingers on both their tentacles and their bell. Be careful, especially when you’re in the waters of northern Australia. As the name suggests, a stonefish looks like an ugly stone covered in moss, yet it’s just the camouflage of a super poisonous fish. If you accidentally step on one, you’d be in extreme pain, and can even lose your life due to their sting. Surprisingly, you can eat them if they are properly processed, and you can get your revenge. You should take “crocodile warning” signs seriously if you’re in Australia, especially the Darwin area. Saltwater crocodiles, aka salties, are enormous, aggressive opportunists, meaning that they eat animals from small fish to big mammals, including humans. As cuddly as they may seem, kangaroos can be dangerous to people. Male kangaroos will fight over female “ownership” with kicking, biting, and punching. You can get seriously hurt if you try to break them up. Female ones can also be aggressive when they carry babes in the pouch. Cone snails have evolved a radular tooth and can attack prey like a harpoon. Although it is painless when you get stung, its neurotoxins will affect your vision and speech if it’s discovered too late. Gympie-Gympie is one of the most toxic plants around the world. It doesn’t look fancy, but you will never forget it once you have been stung. The excruciating pain can last months or even years, so protect yourself when you’re out in the woods in Australia and don’t ignore any plain-looking plant. Dingoes are wild dogs that wander in packs around the Outback. They may not be as lethal as poisonous creatures, but they are definitely capable of being so. For your own protection, don’t mistake them for regular dogs and try to pet or feed them; otherwise, you will get hurt. Lionfish can be found on the east coast of Australia. They will attack you with poisonous fin rays if they consider you as a threat. The venom will cause incredible pain, nausea, and sometimes paralysis. To be fair, the great white shark is dangerous anywhere they live. They can basically eat everything that moves. They can detect electromagnetic fields from things with a pulse, and some surfers even arm themselves with electromagnetic devices to repel them.

The Outback is a vast, hot, dry area in Australia, which makes it very dangerous to road trip lovers. If you still want to take a look at the unique view, make sure you have enough fuel and food for the trip, because there is no service of any sort. Although the waves in Australia are quite amazing and surfers around the world come to have a try themselves, they can be dangerous and even fatal. The waves have been known to form a 40-foot ocean wall, and even if the waves leave you intact, the sharks might not. As the name suggests, these spiders build funnel-shaped webs to trap prey. They are one of the most poisonous spiders of any kind in the world. If you get bitten by them, you’d feel a tingling in the mouth and tongue, nausea, and shortness of breath. The summer in Australia is insanely warm, especially as global warming gets worse. Temperatures in the Outback region can reach 122 °F, which means you can literally fry an egg on the road. Believe it or not, heatwaves are no less dangerous than any other deadly species there. The good news is that Taipan snakes tend to slither away from humans, and there have not actually been that many people that have been bitten. However, it is the most venomous snake in the world and rather common to find in the desert. Stay away and don’t try its patience! Known as the Australian black widow, the redback spider is found all across the country. It’s highly venomous, but thankfully, there was an antivenom created in 1956. In Eastern Australia, brown snakes are a fairly common encounter. There has been more than one death caused by them each year since 2000. The venom delivered by one bite will cause cardiac arrest and massive bleeding. 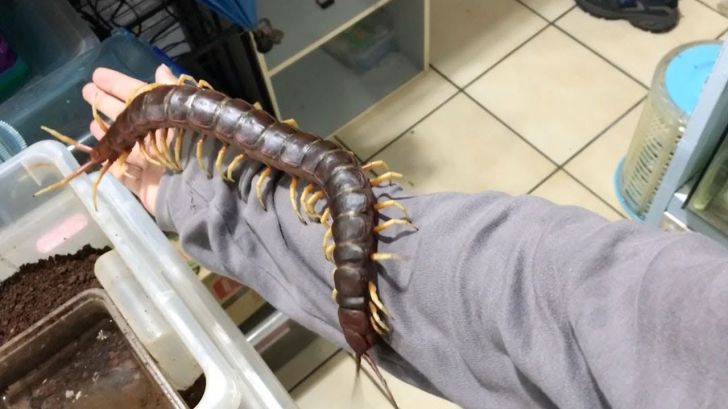 The giant centipede looks like a living nightmare. It can grow to over 6 inches long. It can sting people with its poisonous claws, which cause severe pain. Although some people claim it’s no worse than a wasp sting, it’s still quite painful, and you don’t want to try it.