20 ‘Harry Potter’ Secrets Only A TRUE Fan Would Know

It has been nearly three years since the last time we saw our magic friend Harry Potter on cinema screens. However, we are glad to inform you that Warner Bros is considering a new Harry Potter & The Cursed Child Movie. But before that comes out, shall we have a glimpse at all secrets hidden behind the past movie series?

1. Harry Potter Should Have Green Eyes And Shoulder-Length Hair Harry Potter has green eyes in the original novel, but it was painful for Daniel Radcliffe to wear contacts. So, J.K. Rowling made a concession. Besides, Harry should also have had shoulder-length black hair in Deathly Hallows.

2. Ron Weasley Should Have Freckles And Red Hair Ron was a lanky guy with freckles and a long nose in the book. Moreover, he should have had fiery red hair just like his other family members. Luckily, his look in the movies is much more attractive.

3. Hermione Should Have Buck Teeth Emma Watson finally quit having fake buck teeth in the movies because she couldn’t speak with them.

4. Harry Melling Should Have Been Chubbier The book includes Dudley Dursley’s change from obese to slim, but Harry Melling had accidentally lost too much weight, so he had to reshoot a lot of scenes with a fat suit and special facial prosthetics.

5. Hermione Should Have Hugged Ron

At the end of “Harry Potter and the Chamber of Secrets,” Hermione only shook hands with Ron after hugging Harry. That’s because the actress Emma Watson was too shy to embrace both of them, so the director adjusted the scene a little bit.

6. Arthur Weasley Should Have Died

Arthur Weasley was supposed to have died in “Order Of The Phoenix.” But instead, Bellatrix killed Sirius Black with a curse, which then hit Weasley and sent him into the veiled archway. Fun Fact: his survival was in exchange for Rowling adding two more lives to the body count in Deathly Hallows.

7. Hermione Could Have Been Portrayed By Any Girl But Emma

When the casting team went to her elementary school, little Emma was the only girl present who didn’t desire the chance to portray the iconic role. Her teacher persuaded her to go to the audition, but she was still the last to attend it.

8. Daniel Radcliffe Was Found In A Cinema Producer David Heyman and writer Steve Kloves happened to see Daniel Radcliffe when Daniel went to watch a movie. Heyman felt like Daniel was just like Harry Potter, so they managed to persuade his parents to bring him to the audition. Ron’s hilarious lines “Why spiders? Why couldn’t it be ‘follow the butterflies?'” didn’t come out of nowhere. The actor, Grint himself, has severe arachnophobia. We feel sorry for him.

10. Change Of Laws For The Filming As a result of Child Labor Laws, the 10 and 11-year-old actors could only work four hours a day or less because they had to spare at least three hours for schoolwork. Somehow the laws was changed in favor of the production team.

11. Harry Broke A Rule Of The Duke Humfrey’s Library For First Time Since… As the oldest reading room in the Bodleian Library, Duke Humfrey’s Library had strictly forbidden the presence of fire in it for hundreds of years. However, they allowed Harry to creep into the room with a lantern.

12. They Had Used Real Food, But Then It Went Bad The production team had prepared real food to feature in the Great Hall Feast scene. However, it soon spoiled under the hot lights and gave off a disgusting smell. They seemed to drink butterbeer in the scene, but in fact, their glasses were filled with apple juice.

14. All Kids Had Casts Of Teeth The starring actors’ teeth mattered more than we thought. Daniel Radcliffe, the actor behind “Harry,” once disclosed that an entire cast had fake teeth on standby in case the ten-year-olds lost one or two during the shooting. Do you remember the Ollivanders Wand Shop where Harry bought his first wand? The 17,000 boxes of wands in the scenes were all made by hand.

Daniel Radcliffe has worn 160 pairs of prop glasses in total when appearing as Harry Potter. He also went through more than 60 wands during the shooting. It really takes glasses and wands to be a good wizard, doesn’t it? 18. The Most Costly Prop Dumbledore’s telescope with the signs of the zodiac was one of the most expensive props in the franchise.

J.K. Rowling was so tired of telling people how to read “Hermione.” So she let “Hermione” herself teach Viktor Krum how to pronounce it in Goblet of Fire. Good idea! Improvs were involved in some scenes of the famous movie series. Tom Felton (Draco Malfoy) once said, “I didn’t know you could read.” to Goyle. The real reason was that the actor had forgotten the original lines.

21. They Just Exuded True Feelings In One Scene 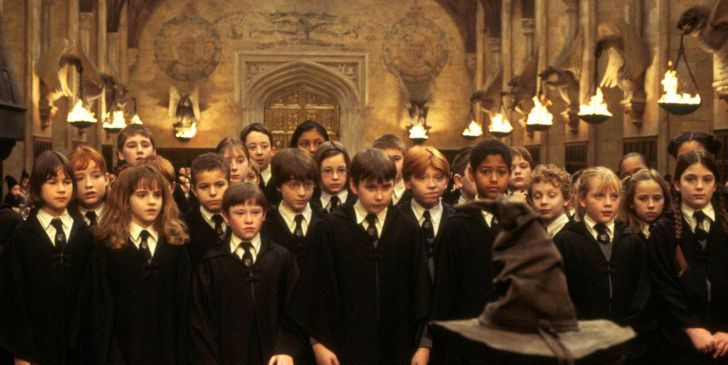 Harry, Ron, and Hermione’s actors were more than amazed when they stepped into the Great Hall where they would wear the sorting hat one by one. It was the first time they’d seen the chamber, so they didn’t have to pretend to be surprised.