You may be lucky enough to see photos of the American flag on the moon, but there are so many other photos that also make various historical moments eternal. Here we have a list of these pictures about 20 remarkable historical moments for you! Have you ever seen Albert Einstein in anywhere else but his lab? Well, here is Einstein, who is enjoying a lovely day at Nassau Point on Long Island, New York. Surprisingly, he is not wearing a lab coat or working on something difficult to understand! Do you know that Marilyn Monroe used to work at a military factory in Van Nuys, Los Angeles, before becoming one of the world’s biggest stars? She helped to assemble airplane parts at Radioplane Munitions Factory when she was still Norma Jean Mortenson. The photo was taken for Yank Magazine in 1944. Here is a young and wild Ann-Margaret on a motorcycle! Not many people know that her last name is Olsson since she is half Swedish. She was such a popular icon as starring in Bye Bye Birdie, Grumpy Old Men, and especially the movie Viva Las Vegas with Elvis Presley. Maud Stevens Wagner was born in 1877 and was a performer in a traveling circus. She entered the tattoo industry after meeting her husband, a sailor who traveled around the world and learned about tattoos. She fell in love with his tattoos and even got lessons as the exchange for a date. They eventually married and ended up with more tattoos!

5. Marilyn From The Munsters In the Munsters, Marilyn, named after Marilyn Monroe, is everyone’s favorite. The role was played by many different actresses. The original one was Beverly Owen, and she didn’t expect the show to gain such success. Sadly, she got depressed after moving to LA, which eventually got her fired. The photo is Marcia Brady, a role played by Maureen McCormick, from the Brady Bunch. From 1969 to 1974, while the show was running, she was adored by people due to her hot looks and perky personality. People were crazy about her and even screamed her name. Even iconic movie stars need to rest from time to time. Here is Vivien Leigh sleeping on the set of Gone with the Wind in 1939. The movie was iconic enough to be the first to win an Academy Award. Taken in the 1960s, the photo shows Yvonne Craig getting dressed in a Batgirl uniform for the humorous ABC TV show Batman. Unfortunately, this photo is in black and white, which can’t show Batgirl’s funky purple and yellow outfit.

9. A Look At The Face Of The Statue Of Liberty Although the photo seems a bit creepy, we have to admit it’s also pretty cool. The French offered the United States the Statue Of Liberty in 1886, which is now situated in the New York Harbor. It was designed by Frédéric Auguste Bartholdi and built by Gustave Eiffel. It is Joan Trumpauer Mulholland, a freedom fighter in this photo. She left her family, education, and everything else just to protest for what she believed in. She appeared in many civil rights movements and advocated for integration. She went to jail for her activism at some point and was even put on death row for 2 months.

11. The First Flight In History On December 14th, 1903, Wilbur Wright was controlling the damaged Wright Flyer on the ground after an unsuccessful flying attempt at Kitty Hawk, North Carolina. 3 days later, his brother Orville piloted the plane and made it the first sustained flight of an aircraft after finishing the repairs. The abandoned house looks creepy but still very cool, and it may have once been inhabited by The Munsters. It would probably need some renovations, but it would make an amazing getaway place. Thankfully, we learned something from Tom Hanks’ flick The Money Pit in 1986.

13. Stella Grassman Being Tattooed By Her Husband In 1900s As mentioned before, Maud Stevens Wagner was the first female tattoo artist in America. It was very odd for a woman to have tattoos or work in the industry back in the 1900s. The “tattooed lady” rose to fame in the 1920s, working for the Ringling Bros. Barnum & Bailey Circus.

14. The First Selfie In Space Buzz Aldrin went on a mission on Gemini 12 in 1966 and was the first to perform a successful spacewalk. He made the very first selfie in space. The program was to show that astronauts can work effectively outside of a spacecraft. The mission means a huge step for mankind, and also a small step for selfies. This is how portable music worked in the 50s. This housewife looks absolutely glad to be able to listen to some music while cooking Christmas dinner. She probably had no clue how it worked. People could access these portable battery-operated music players but with a high price.

16. A Mummified Cat Discovered In Egypt Cats were considered sacred in Ancient Egypt, and they even had a religion that worshiped cats. The mummification of cats started there, and the reason for doing so was to allow pets to have an afterlife, or act as offerings to gods. In 1948, young people would hang out, listen to records, have some milk and cookies, and that’s all. They weren’t going through social media every second, hoping for a new Like. Things were much simpler. Fun fact – there wasn’t the word teenager until the late 1940s!

18. A Fisherman With A Huge Fish In Istanbul Well, that’s either a huge fish or a tiny man. Nowadays, the commercial fishing season starts with about 20,000 registered fishing boats. Turkish people would say: “Vira Bismillah,” which means “raising the anchor in the name of God. Those who were born after the 90s may not know, but many people had to work with these bulky systems in school. This photo shows a National Space Invaders Championship, meaning that video game competitions existed back then. It was the first gaming contest ever in 1980, and over 10,000 people participated.

20. Mount St. Helens Before The Eruption 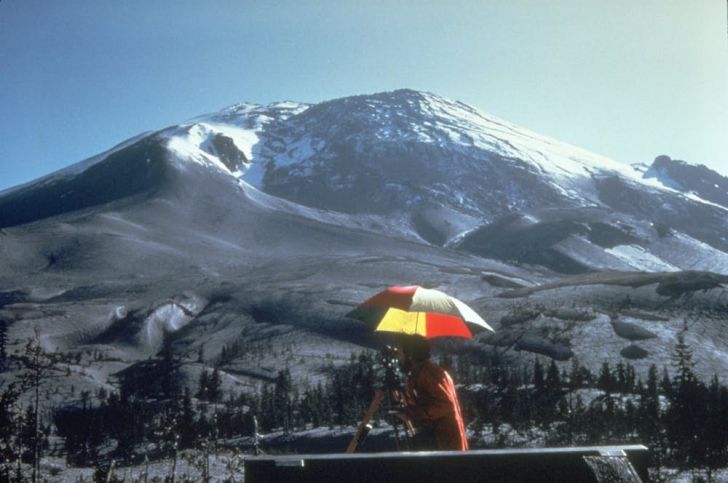 This photo was taken only one day before its devastating volcanic eruption at Washington’s Mount St.Helens on May 17th, 1980. It was the largest one in American history and killed a total of 57 people. It also caused more than a billion dollars worth of damage, with ashes depositing across eleven states.