Apple cider vinegar (ACV) is the latest “superfood” sweeping the internet. Commonly used as a secret ingredient to liven up dishes like salad, the vinegar can also help you out in just about every aspect of your life. From helping lower blood sugar levels to cleaning common items in your house, here are 20 of the most surprising uses for apple cider vinegar! Apple cider vinegar has been used to cure athletes foot. The probiotics in ACV can help kill off candida yeast that causes foot fungus. Just soak your feet in a small basin of water mixed with a cup of ACV in it for about an hour. A few nights of this later, your foot fungus will begin disappearing. Eventually, you can make an anti-fungal spray. 2. Useful As A Weight Loss Aid

Studies have found that apple cider vinegar can be helpful in weight loss. Taking a tablespoon of ACV before a meal can make you feel fuller, thus causing you to eat a bit less than you normally would. For those who are trying to lose weight, ACV could make a great supplement to your current diet and exercise routine. Apple cider vinegar could be your saving grace the next time you caught a cold. Gargling a diluted solution of ACV and dissolved table salt will help kill bacteria and soothe your sore throat. You can also clean up a stuffy nose by soaking in the scent and steam of hot, steamy water that has ACV in it. Apple cider vinegar can be useful to people who suffer from acid reflux and heartburn because it can increase stomach acid, which in turn will prevent back-flow into the esophagus. Drinking a few tablespoons of ACV mixed with water before a meal will allow you to have a pleasurable dining experience. This also reduces flatulence and heartburn caused by a spicy meal. 5. Works As A Natural House Cleaner

Apple cider vinegar works well as a natural alternative to cleaners that contain harsh chemicals. ACV’s active cleaning agent is acetic acid, which kills bacteria on a cellular level and is safe for most surfaces. ACV can also kill mold and E. coli when mixed with table salt or hydrogen peroxide. Just be sure to combine in a gallon of water for every cup of ACV that you use. A study has proved that apple cider vinegar helps aid patients with type 2 diabetes and people with high blood sugar. ACV helps improve the body’s insulin sensitivity to meals that are high in refined carbs and sugars. Just several spoonfuls of ACV before bedtime can work wonders for you by morning. Be sure to check with your doctor if incorporating ACV in place of blood-sugar-lowering medications will be safe for you. Sunburn is never fun. Luckily, you can feel better faster by bathing with apple cider vinegar. A cool bath mixed with a cup of ACV, 1/14 of a cup of coconut oil, and a few drops of essential oil can soak your pain away. Alternatively, you can make a 1:1 solution of ACV and water and then spray it onto your sunburn. Though it doesn’t smell the best, you’ll feel relief in no time. Could apple cider vinegar decrease the risk of developing heart disease? It’s possible. Animal studies have proven that ACV reduces blood triglycerides, cholesterol, and blood pressure, which might be promising for humans cases in the future. Until now, the only human evidence is the reduced risk of heart disease in women who ate salad dressing with ACV. But the fact that ACV helps combat diabetes is a heart disease risk reduction in itself and is worth a try. Apple cider vinegar is used by some people to detoxify and cleanse their lymph nodes. The acids in raw, unfiltered ACV bind to toxins in the body and helps it get rid of them faster. ACV also helps break up mucus and flushes out the lymph nodes for better circulation. Besides, it stimulates circulation and aid detoxification in the liver. All of that helps remove toxins and improve the immune system. Apple cider vinegar is the best-kept skincare secret for people who have acne problems. Its acetic acid is naturally anti-bacterial and anti-biotic. It not only can cleanse the skin of dirt and grime, but also dry out blemishes and maintain clear skin. Always make sure to dilute your ACV with water because placing ACV directly on the skin can be harsh. There are lots of homemade recipes for facial toners that use ACV, and they can add extra benefits as well! 11. Ousts Weird Smells In Your Home

Apple cider vinegar can also oust those strange, elusive odors in your house. You can fill small jars with ACV and place them in smelly rooms. This will make your rooms smell fresh in no time. You can also add herbs or essential oils to customize the scent. Alternatively, you can use a 1:1 solution of ACV and water as natural air fresheners and deodorizing sprays. Apple cider vinegar is often used as a natural weed killer in organic gardens. Its acetic acid is powerful enough to kill weeds on contact, making them wither up within a few days. But some gardeners say that it isn’t as effective as pulling out the weeds by hand, because ACV doesn’t necessarily kill the roots. Apple cider vinegar is an awesome natural remedy for people with dandruff issues. Loaded with vitamins and acidity, ACV helps regulate the hair’s pH levels. Its antimicrobial properties also help relieve itchy scalps. Washing your hair with a solution of water and ACV not only improves scalp health but also strengthens your strands and enhances shine. On your next laundry day, try apple cider vinegar. It’s a great natural alternative to detergents and fabric softeners that are full of harsh chemicals. ACV kills bacteria building up in clothes and chemical buildup from synthetic laundry products. It also softens your clothes and removes static cling, lint, and pet hair. To try this, simply add a 1/4 cup of ACV to a full load of laundry. The acidity in apple cider vinegar can remove hard stains on many fabrics. Simply apply it to greasy spots in clothes before throwing them in the wash. ACV also helps remove carpet stains. After blotting the stain with a clean cloth, spray an ACV solution on it and then blot it again a few minutes later. Repeat the process until the stain is gone! 16. Eliminates Body Odor For Some People

Some folks have used apple cider vinegar as an alternative to their everyday deodorant. ACV’s acidity can regulate your skin’s pH levels, which reduces the amount of odor-causing bacteria building up on the skin over time. This has been proven effective for those who cleanse themselves with ACV from the inside-out. It also works for people who apply diluted ACV directly to their skin. Apple cider vinegar can make your furniture look brand new! Make a mixture of equal parts of ACV and olive oil. A bit of lemon juice can boost this natural furniture polish’s cleaning power. Simply rub down your furniture with it, then buff it away. ACV can also be used to make a natural wood stain. Soak a piece of steel wool in undiluted ACV, and a few days later, a rich brown stain for wood will be created.

18. Wards Off Pesky Bugs And Insects

Apple cider vinegar is a natural pest control alternative. Bugs are deterred by ACV’s taste and smell. Spraying insects infested areas with ACV will keep them away. You can also place a small dish of ACV where gnats and flies tend to linger. Some people also use ACV to repel fleas on pets by bathing them in a diluted ACV solution.

Apple cider vinegar also does the trick when you have a clogged shower or sink drain. Heat up some ACV in a pan on the stove until it’s hot but not boiling. Then carefully pour the hot ACV down the drain and let it sit for several minutes before plunging. You can also add some baking soda into the drain before applying the ACV for extra-strength cleaning power. There are some folks who use apple cider vinegar as a substitute for mouthwash. Though its taste isn’t for everyone, ACV does help people who are sensitive to chemical mouthwashes. Its antibacterial properties effectively create an extra-clean feeling, while eliminating microbes that cause bad breath. Simply combine a tablespoon of ACV for every cup of water for a safe rinse. Be sure not to use concentrated ACV as it has too much acid and will damage your teeth. 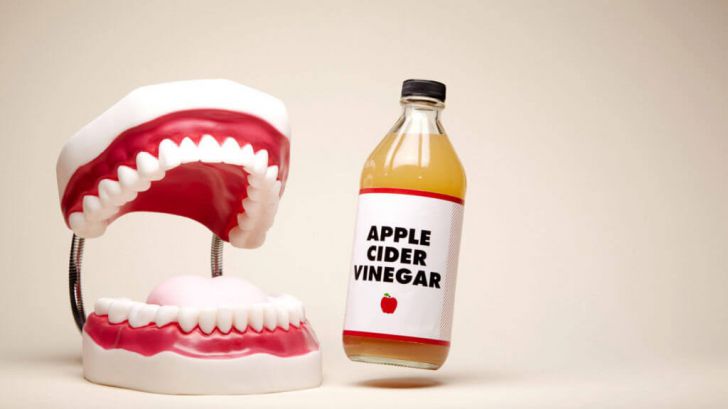