21 Celebrity Children Have Similar Appearance With Their Parents

Many of you must be very familiar with the power of genes. But when you see these kids, who have exactly the same appearance as their parents, you will still feel incredible. In this article, we will compare the faces of famous stars and their children. Please be ready for the surprise.

Actually, Shiloh is the 14-year-old daughter of Brad and Angelina. Differently, she always appears in public with a boyish style, which makes her look much more similar to her father, especially their eyebrows and eyes.

As the daughter of Katie Holmes and Tom Cruise, Suri fully inherited her parents’ advantage of the appearance, especially Katie’s lovely nose and Tom’s sparkling eyes. Compare the two faces carefully, and then you will find that Uma and Maya have exactly the same nose and mouth. No one will doubt their relationship. Can you believe the two women in the photo are mother and daughter? Demi and Rumer have similar hairstyles, body shapes, height, and the exact same smiles! Even Rumer herself also shared a photo of her and her mother and typed a line: “That moment when you realize you actually are becoming your mother.” Wow! Did Ava duplicate from her mother? You may think Reese is too young to have such a beautiful teen daughter. Actually, she was only 23 years old when she gave birth. Scott Eastwood is the complete copy of his 84-year-old actor and director father Clint Eastwood in his younger years. David’s three boys with Victoria Beckham are clearly rivaling their 35-year-old dad in the cuteness stakes and have all taken on their dad’s good looks. Tom Hanks is a famous American actor and filmmaker who has starred in many big films and had been nominated for scores of awards during his career. Tom Hanks has passed the torch to his son Colin Hanks, who just happens to look perfectly like a young version of his dad. Mamie Gummer is so startlingly like her mother, Meryl Streep. She deploys many of her mother’s characteristic mannerisms including the pursed lips and the coy glance. Since her father O.J. Simpson’s infamous trial over 20 years ago, Sydney Brooke Simpson has laid pretty low, and she even has no public Twitter or Instagram. She owns a company called Simpsy Properties LLC and rents out housing in St. Petersburg, FL. Julianne Moore has passed her red locks and complexion on to her daughter Liv Freundlich, and they even have the same expression when they laugh. Matilda may have lost her father more than 8 years ago, but Heath’s daughter still proves she is her daddy’s little girl. Tina Fey and Alice Richmond could be twins though we couldn’t tell if she has inherited the funny gene. Alice Richmond has shared the same reluctant smile as her mother. Ava Sambora is growing up to look alike her mom Heather Locklear. The bright eyes and long blonde locks make them a strikingly Hollywood mother-daughter duo. Dylan Penn has always been said to be a little version of her mom. She doesn’t only take after her mother’s stunning looks but also is inherited her stunning figure. It has been 36 years since John Lennon was murdered in 1980 in New York. His son Sean Lennon looks remarkably like his father and has also made a musical career. Kate Moss’s mini-me daughter is 14 years old and often gives her mom some stellar advice when it comes to being red-carpet ready or a movie premiere. Violet Affleck bears a striking resemblance to her mother, Jennifer Garner. Both of them share the same facial structure.

Lily-Rose Depp is just 17 years old, but has already become an actress and fashion leader, with her ability to shine in front of the camera. Not only has Kaia Gerber inherited her mother’s supermodel good looks, but she also continues to take after her mom and has found her own style as a model. 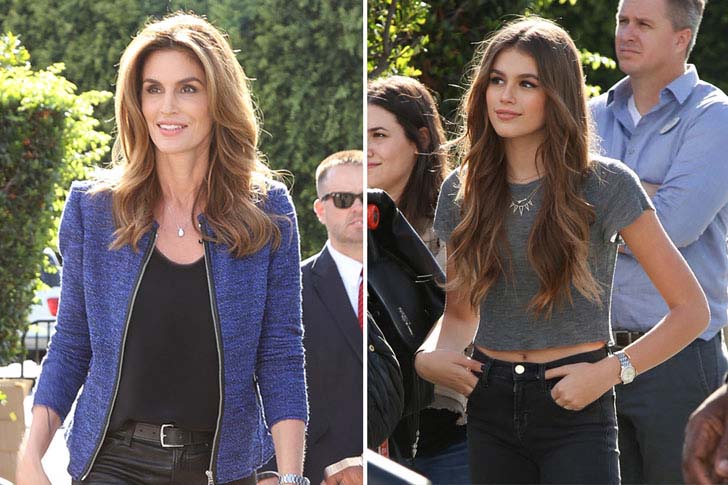