22 Celebs Who Hide Their Bonding From The Public

Celebs’ personal lives are always under the spotlight, but some of them choose not to share marriage news with the media. Here are some celebs who secretly get married; scroll down and find out who they are.

Miley Cyrus and Liam Hemsworth tied the knot in secret! Although there were rumors about their wedding, they successfully kept it secret and finished their ceremony inside their home in Franklin, Tennessee. The photos that emerged of the two cutting cake with “Mr & Mrs” balloons and lots of friends and family proved that they were definitely having a great time. Gwyneth Paltrow was secretly married to producer Brad Falchuk on September 29, 2018, at her East Hampton, New York, home. The wedding ceremony was held under large white tents on the grounds of her home, and the celebrity guests such as Jerry Seinfeld, Robert Downey Jr., Cameron Diaz were invited, along with her husband, Benji Madden. American director Quentin Tarantino married Israeli singer and model Daniella Pick, daughter of musician Svika Pick on November 28th, 2018. They picked a small Los Angeles ceremony, and their wedding is a first for them both. 56-year-old Quentin previously noted that he never married before because he was wholeheartedly committed to the movie industry. This time he might just have found his true love. It was a surprise when Miranda Lambert got married. She revealed the news to the Instagram On Saturday, February 15, in an announcement no one saw coming. The first surprise was that she was married and the second was that, according to her rep, she actually said “I do” earlier in the year. The news of Ed Sheeran’s marriage to Cherry Seaborn was never announced to the media until he accepted an interview in late August 2018, where he was asked about his affection, and he pointed to a silver ring on his finger. It certainly caught the interviewer off-guard and he gave them both his congratulations. What a wonderful reveal. This hot couple got married secretly in 2009, but they did not invite any photographers. Only nine years later we can get a glimpse of the two in their wedding attire. They both posted pictures from their wedding on social media to celebrate their anniversary. Gisele wrote: “What a ride these past nine years have been I love learning and growing with you. Happy anniversary love of my life! Te Amo muito!” Saturday Night Live star Aidy Bryant got married with longtime boyfriend, Conner O’Malley in 2018. The couple looks as happy as pie in a picture Bryant uploaded on her Instagram on April 30th. The photo shows the couple walking down the aisle as family and friends applaud. Bryant looked gorgeous in a white gown that reaches just past her knee, matching perfectly with her purple Prada heels. The former Baywatch hottie David Hasselhoff tied the knot with his fiancé of many years, Hayley Roberts in Italy on August 1st, 2018. The ceremony took place in a southern region of Puglia among close friends and family. Their 28-year age gap doesn’t seem to bother them one bit. Smoldering Fuller House star and his model and actress fiancée tied the knot in secret on Feb 3rd, 2018 at the Little Brown Church in Studio City, California. “They exchanged vows in front of family and close friends. It was a very touching ceremony,” according to an insider. Caitlin Mchugh looked radiant as she was pregnant with their first child at the time of their vows. These two gave the world a surprise when they made their relationship official on March 9th, 2018, as they had an elven polyamorous relationship and marriage before that. Tortorella wrote “Just married. For real” alongside a series of photos of their wedding day on his social platform. Robin Wright secretly married Clement Giraudet in the middle of August 2018, and the wedding took place in La Roche-sur-le-Buis, an area of Provence, France. Media only got photos of Robins’ secret wedding from her daughter. Despite the 20 year age gap between them, Robin is very much in love. Daniel and Rachel met during the filming of their 2011 thriller Dreamhouse and began dating in late 2010. Soon after they were secretly wedded in a private New York City ceremony in 2011, and only four guests were in attendance. Last year, Rachel Weisz revealed that she was pregnant, and the couple will soon welcome a baby girl into the family. Kristen and Dax met in late 2007 and got engaged in January 2010. They delayed their nuptials until California passed legislation legalizing same-sex marriage. Months after the Defense of Marriage Act fell, the two finally got hitched at the Beverly Hills County Clerk’s Office on October 17th, 2013. Their wedding cost a wild amount of money by Hollywood standards. Ellen and Emma made their first public appearance as a couple at the premiere of Flatliners in September 2017. On January 3rd, 2018, Ellen revealed that the two had gotten married in a brief but emotional Instagram post. The news surprised all Ellen’s fans. Olivier and Mary-Kate started dating around May 2012, and their super secret 50-guest wedding was held at a private residence in Manhattan on November 27th, 2015. One weird and funny thing about their marriage is that guests were reportedly asked to hand over their cell phones during the ceremony. Zoe has portrayed Gamora in multiple films in the Marvel Cinematic Universe, and the character left a deep impression on fans. After she began dating Marco in the spring of 2013, she married the Italian artist in a secret ceremony in London after just a couple of months. Australian beauty Margot and assistant director Tom were married in a private ceremony in Wales in December 2016. They never told anyone about getting engaged or getting married, but later it was confirmed by a photo released by Tom where the two were kissing with their ring fingers in view. On October 7th, 2018, Barbara Bush, the former first daughter of former POTUS George W.Bush, married her fiancé, screenwriter Craig Coyne under the radar. The ceremony took place at the Bush family compound in Kennebunkport with 20 family members witnessing it. The over ten-year age gap couldn’t stop Alicia Vikander from marrying her love. Their marriage took place far away on the party island of Ibiza, Spain on October 15th, 2017. They were caught by the British Daily Mail partying with friends on the beach. The couple was dancing and having fun with jewelry on their fingers. Richard and Alejandra are another Hollywood couple who prove age really is just a number. Gere at 68 and Silva at 35 tired the knot with each other and it seems they are extraordinarily happy and living their best years together. Blake and Ryan, who met while filming Green Lantern in early 2010, began dating in October 2011. On September 9, 2012, the pair tied the knot in a super secret 35-guest ceremony held at Boone Hall in South Carolina, the estate that was famously featured in the 2004 romance The Notebook. The couple has had two babies so far, but fans are keeping an eye on Lively to see when there will be the third one. 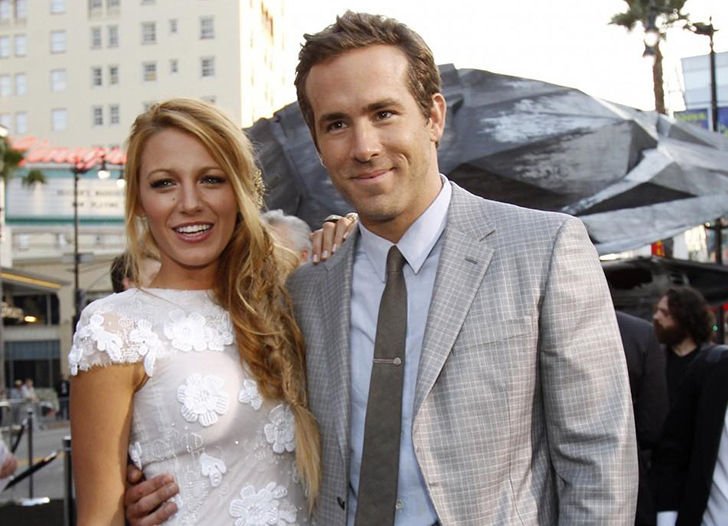 It was no secret that the GOT lovers Rose Leslie and Kit Harrington were tying the knot, but the details of the big day, including the major question of which GOT cast members would be present, were all kept secret…that is until the big day itself. It turns out almost all the GOT cast members were there, and this was the real royal wedding. 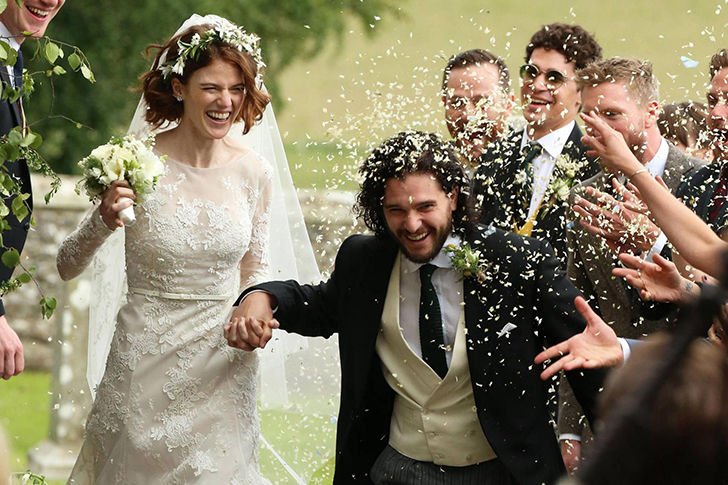