25 Celeb Marriages That Stood The Test Of Time

The Closer actress ran into her future husband during the filming of the late 80s television drama Lemon Sky and tied the knot soon after in 1988. Now the couple has two children and resides in a luxurious mansion on the Upper West Side of Manhattan. Although the two lost part of their savings in the Ponzi scheme run by the infamous swindler Bernard Madoff, they still have a combined net worth of $45 million. Julia Roberts fell in love with cameraman Daniel Moder on the set of The Mexican in 2000. Back then she was still dating Bratt, and Moder was married to Vera Steimberg. After her breakup and his divorce, the two took the plunge in 2002. Although the A-list actress had problematic relationships previously, she is now happily raising three children with Moder. The James Bond actor has spent 44 years together with painter Micheline Roquebrune. During his career, he has won an Academy Award, two BAFTA Awards, and three Golden Globes. The once “sexiest man on the planet” is 89 now and has a net worth of $120 million, so he can enjoy the most comfortable retirement life with his wife. When it comes to true love age is but a number, and that’s especially true for Harrison Ford, since when he fell in love with actress Calista Flockhart, he was over 60 years old while Calista was just 38. Nevertheless, the two took their vows in 2010 and have spent 9 years together. Being a licensed pilot, we are sure the Star Wars actor has spent lots of quality time with his wife on one of his private jets. Goldie and Kurt have been dating for 36 years, but they never tied the knot. The two first met on the set of The One and Only, Genuine, Original Family Band in 1966, and fell in love while filming Swing Shift together. In 1986, they welcomed a little boy named Wyatt into the family. SO far they’ve maintained a strong and stable relationship and together they own properties in Canada, Colorado, New York and California. Sam Elliott is famous for his cowboy and rancher roles. He has been married to actress Katharine Ross for 35 years. The lovely couple met on the set of Butch Cassidy and the Sundance Kid in 1969, but didn’t begin dating until they met again while filming The Legacy together in 1978. Now the two are raising a daughter together and are still very much in love. These days we don’t see Phoebe Cates that much on the big screen, but she was a big star in the 1980s. Her roles in films like Fast Times at Ridgemont High and Gremlins were a big deal at the time. She first met her now-husband actor Kevin Kline while auditioning for a role in The Big Chill. The two dated for a few years and tied the knot in 1989. Another example of a celebrity marriage with a huge age gap is Michael Douglas and Catherine Zeta-Jones. Although Michael Douglas is 25 years older than his wife, the two are happily married with two children. Reports say they have a prenup agreement. Catherine is to get $2.8 million every year, and if Douglas cheats on her, she gets $5 million. The couple’s chemistry started instantly when they met for a screen test of All My Children. They soon started dating and tied the knot in 1996. The pair used to live on Crosby Street in SoHo, Manhattan, but they sold the house in 2015 for $20 million. Now they live in a townhouse on East 76th Street, which was previously owned by fashion designer Luca Orlandi. Will Smith’s marriage with actress Jada Pinkett Smith has survived frequent rumors of splits and infidelity and the couple has remained together for 22 years. Despite Will being one of the highest-paid actors in the world, the couple never filed for a prenup agreement. Tom Hanks first met his future wife Rita Wilson on the set of TV comedy Bosom Buddies, and when they crossed paths again in 1985 on the set of Volunteers, they fell in love. The duo finally got married in 1988. Now with a combined net worth of more than $350 Million, the couple can enjoy a secure and comfortable life for many years to come. The first couple of country music has been going strong for 23 years now. Back then when they first met, they were both engaged to their partners, but love and fate brought them together in the end. They got married back in 1996 and are now raising three children together. Jamie Lee Curtis first “met” Christopher Guest on the cover of Rolling Stone magazine in 1984. She saw a picture of him from the movie This Is Spinal Tap and said to her friend Debra Hill that she was going to marry that guy. Five months later, she did. Now after 35 years, the couple is as close as ever. Kirk Douglas And Anne Buydens’s longtime love story started when Kirk was acting on location in Lust for Life. They have two sons together, Peter and Eric. Both of them have stepped into the film industry with Peter being a producer and Eric being an actor. Tragically Eric died of an overdose in 2004. During their longtime marriage, Douglas had several affairs, but Anne was okay with it.

Despite being Hollywood stars, the couple prefers to keep their private life private. They met each other on a blind date in November 1993 and took the plunge just 10 months later. With an adopted girl and a biological son, the two are living a comfortable life complete with a fat bank account. The two first met on the set of the 1997 teen horror film I Know What You Did Last Summer, but did not begin dating until three years later. They were engaged in April 2001 and tied the knot in Mexico on September 1, 2002. The celeb couple has starred in several films together including the Scooby-Doo series. Now 17 years have passed, but the couple haven’t aged one bit. We can only assume they’ve been using a special skincare routine. Despite a 21-year age gap, the marriage between Hollywood legend Sophia Loren and Italian producer Carlo Ponti Sr. has stood the test of time. The two got married by proxy in Mexico in 1957, but Carlo Ponti Sr. was not legally divorced from his first wife at that time. This led to an annulment in 1962 to escape bigamy charges. Luckily they managed to get a legal marriage in 1966, and lived together until Ponti’s death in 2007. Tennis player Anna Kournikova and pop singer Enrique Iglesias have been so protective of their private life that we don’t actually know if the two are legally married. But whether they tied the knot or not, they look perfectly in sync with each other. The lovely pair welcomed twins through a surrogate in 2017.

Before taking the plunge and getting married in 1997, the pair had dated on and off for 15 years. After two decades of marriage, the gorgeous actress exclaims that she still swoons over her hubby big time. With a net worth of $45 million, the couple are rocking married life. Jeff met his future better half on a ranch. He was filming Rancho Deluxe while Geston was working as a waitress. The actor fell in love with Geston immediately and married her in 1977. The couple now has three daughters together, and the love between the two doesn’t seem to have dimmed in the slightest. The pair started their relationship in 2004 and got married in 2008. They share a mutual love for animals and have adopted four dogs and three cats in their Beverly Hills mansion. Although addiction has been haunting their married life, the important thing is that they are still together no matter what happened in the past.

Legendary musician Elton John began a relationship with David Furnish, a former advertising executive and now a filmmaker in 1993. The two formed a civil partnership in 2005 and married in 2014 once gay marriage was legalized in England. Their love has stayed strong after all these years and they still greet each other with a card every Saturday. 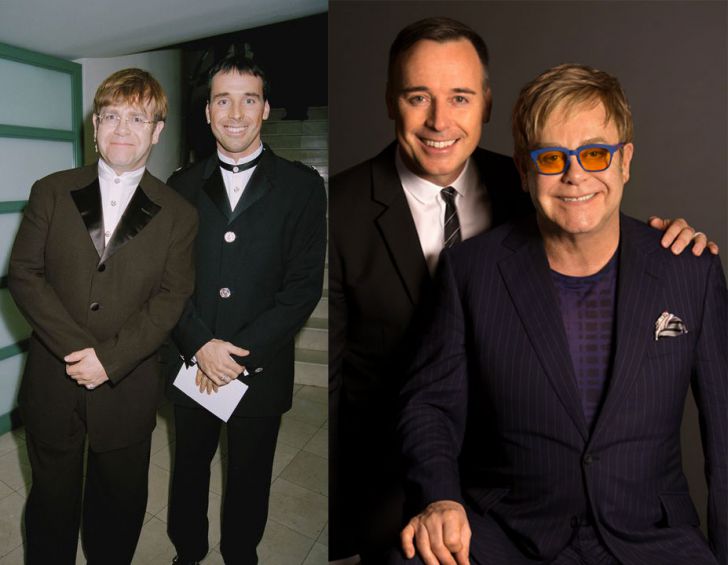 Stunning model Cindy Crawford met her future better half, businessman Rande Gerber while doing tequila shots at a nightclub. Maybe that’s why the pair made investments in the tequila business with close friend George Clooney. The investment earned the couple a billion dollars, which must have gone a long way to increasing their considerable wealth. 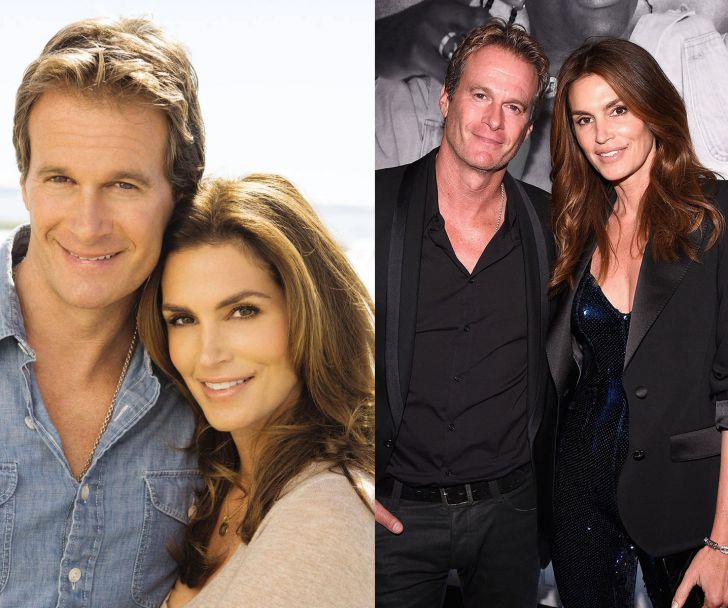 Loni Anderson made herself a household name by playing Jennifer Marlowe in WKRP in Cincinnati. She has been married four times. The fourth time seems to have been her lucky strike, as she has been married to musician Bob Flick since 2008.

The couple has broken all relationship stereotypes in Hollywood. They got married in 1996 in spite of a 13-year age gap and remained together even after Hugh’s global stardom. Living the most comfortable life in the world, the couple never seemed to care what others have to say about their relationship. 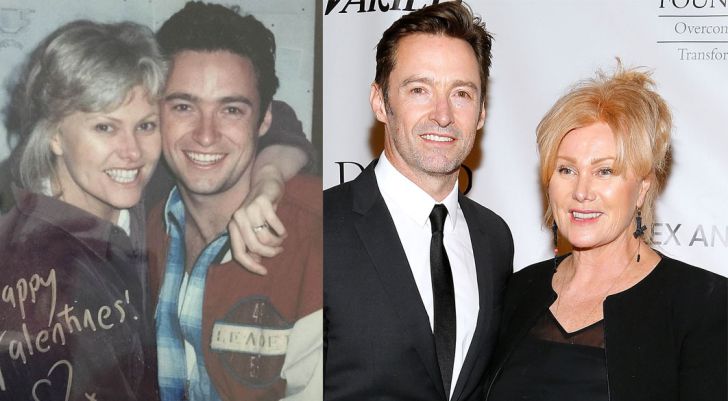