Here are some of the mind-blowing drone images of the most remote and awe-inspiring regions of the world. Roll through, as you need to see to believe.

Yes! This is the “Infinite Road to Transylvania” in Romania. 4 pictures have been taken in the same place throughout the year and blended together. Supercool drone images showing merging seasons give you a glance at how fabulous a view Dracula must have had way back then. As an international city in China, Shanghai now has a population of 24 million people. Thanks to drones, we can feel the hustle and bustle of this megacity via a glimpse of the multi-interchange at rush hours. In Vietnam, a woman was busy harvesting water lilies in a pond. The birds-eye view of the scene takes your breath away with the stillness and busyness of life perfectly blended in one photo. It won second prize in the People category of the 2017’s International Drone Photography Contest. “He is over sixty, he is the world record holder for the Guinness waterfall diving. In China’s famous spout of the Yellow River and the great falls of the water tower in Heilongjiang Province, he surprised the world with his leap,” the photographer shared the story of the photo. 5. Cheetah Trying To Catch A Drone

A cheetah tries to catch a quadcopter drone flying past it, having no clue that his attempt had been photographed. I mean, you couldn’t ask for a better timed picture! Say hello to the world, puss. Have you ever seen New York from this perspective? It’s absolutely phenomenal. From high above, New York seems to be made of millions of luminous cubes. Where are you under this really dark and chilly sky? This appealing image was taken in Hualian, Taiwan. Imagine a girl lying on the beach alone, and that she is so breathtakingly beautiful the waves are perfectly happy to be her skirt. So creative! This picture captured the exact moment when a polar bear was making the leap from one ice sheet to another. Photographer Florian spent a lot of time in the Arctic region to take this amazing image. That’s wildlife in the truest sense. A fantastic mix of colors and picturesque scenery in the early morning fog gives you a dream-like feel. The picture caught the scene of a traditional fisherman in Myanmar fishing using leg-rowing techniques. He sets one leg at the front of the boat and uses the other in the water to paddle while fishing. Santa Maddalena village in Italy looks like a surreal fairy tale setting in this photo. The vivid colors, sweeping hills, and distant mountains make us feel in awe of the tranquility and magnificence of nature. 11. A Shipping Container from Above

It’s incredible to find how things can look so dramatically different when seen from another angle. A shipping container was sailing through Southampton, England, giving photographer Alex an amazing chance to catch it from above. This is a baby lobster breeding farm in central Vietnam captured from high above the crystal blue waters. Nature works side-by-side with man-made designs in a perfect harmony. Many farmers raise ducks for a living in Asia. Here in this photo a Vietnamese man is walking across the river and inspecting his flock. The white ducks and peaceful river go very well together. The Gallinas River and the Santa Maria River merge and create a 300m wide waterfall – Cascada de Tamul. With the help of drones, we finally have the honor to see the grandeur of it. A pack of white camels wind their way across the rich red sand of Saudi Arabia to search for water. Artist Abdullah Alnassar captured the moment, giving us a chance to appreciate the impressive view of this tranquil desert. Clouds swirl through the pillars of Sagrat Cor Church, high on a hill above Barcelona. The unbelievable facade is partly hidden in the fog, creating the feeling of mystery and solemnity.

This photo is taken in Saint-Malo, France. The waves are crashing on the shore with the waters lapping the streets, right in front of the residential area. Refreshing colors add resplendent feel to the place. You probably haven’t heard of the republic of Abkhazia, a region that has witnessed widespread killings and ethnic cleansing. Many areas, including this college, have been buried together with those lost lives in people’s memories. It has taken back the peacefulness it should have embraced then. What do you think it is at first sight? A dry and cracked desert floor maybe. Yet actually it’s a lake. Drone photographer Milo Allerton captures a family boating in Burke Lake in Virginia. If you look closer, you’ll see the little ripples. Spectacular color and an amazing shot describe the coexistance of nature and human engineering. The Katskhi Pillar located in west Georgia is home to a local monk whose name is Maxime. At the age of 59, he gets food and supplies from followers twice a week. A ladder of 131 ft needs to be scaled for him to reach the ground. 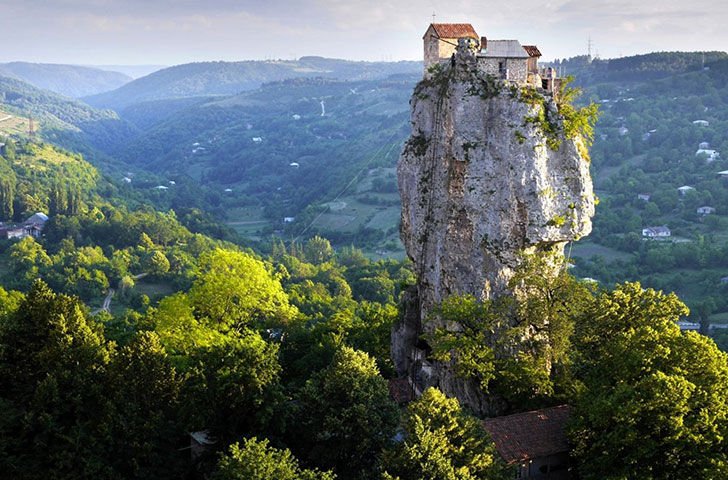 There are certain people who scale the dizzying heights of a building to clean windows. They are captured whilst cleaning a skyscraper at sunset. The cityscape is magnificently reflected against the glass, mirroring the warmth of the end of a day. 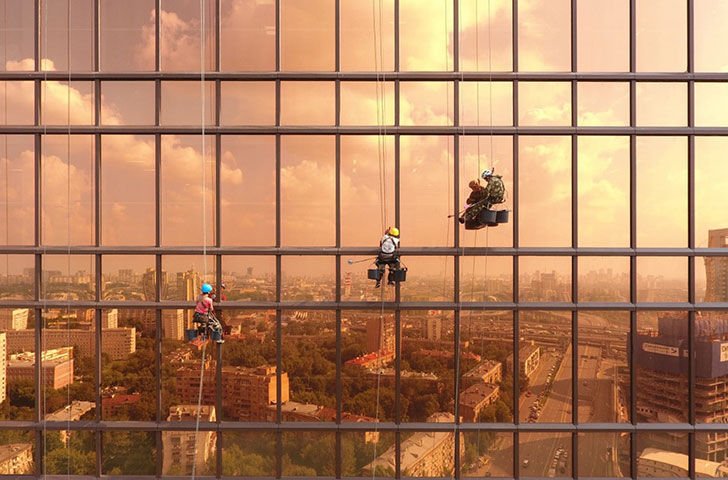 In the Mekong Delta, extensive salt fields are expanding along the coast, divided into squares and rows with sparkling white salt under the sun. Workers are busy drying salt before selling it to markets across the world. 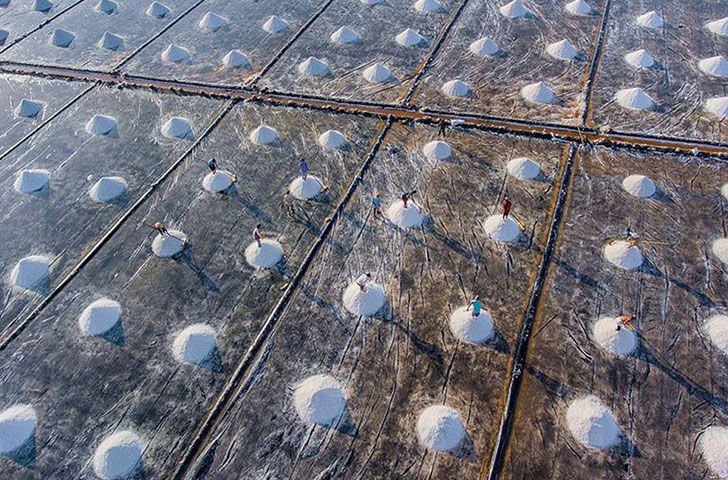 This eagle was trying to pluck the drone out of the sky because it mistook the machinery for another bird, which was captured a thousand feet above the ground. Magnificent shooting and perfect timing. 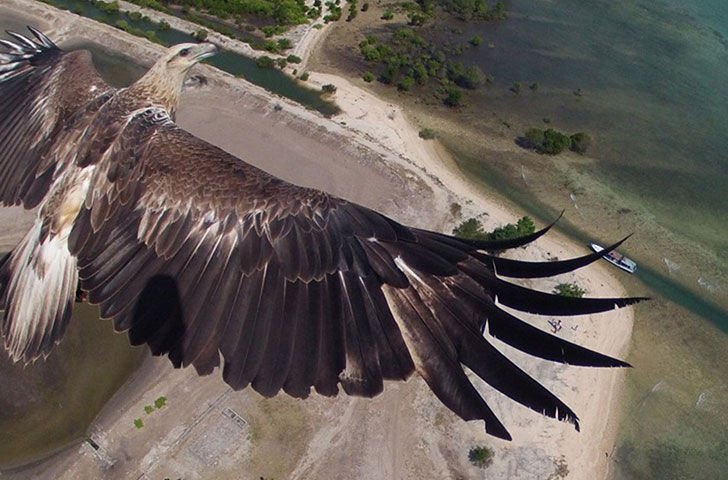 Don’t doubt your eyes, the boat isn’t floating in the air, but rather swimming in the ocean. Costa Smeralda, translated into Emerald Coast, is dotted with 80 spoiled bays and coves. This view of the crystal clear water is everything you need in a hot summer. 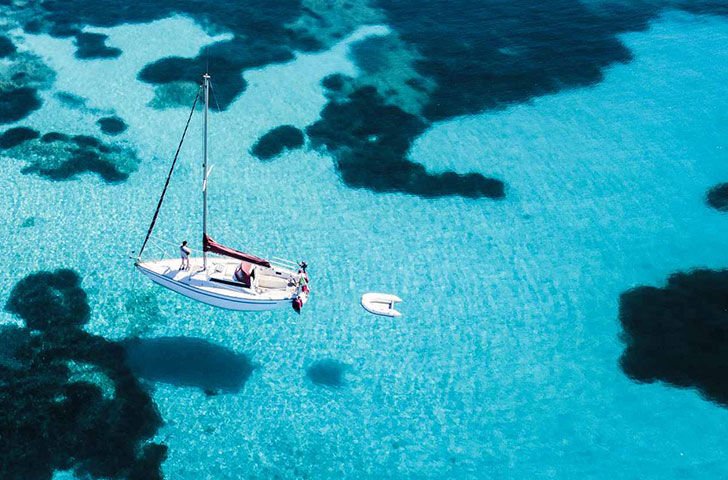