Sometimes, a perfectly timed photo can really help you understand the agility, speed, grace, and athleticism that sports events put on display. Other times, they just make for a good laugh. Check out these perfectly timed sports photos and decide which is for yourself!

Although this may look strange, the swimmers spitting the water was actually part of their synchronized swimming routine. But when taken out of context, the move looks rather silly. This pitcher’s arm is super flexible and almost looks like rubber. He moves his arm in a forward motion to launch the ball towards the plate. Bobby Martin, born without legs, tried hard to play high school football. This picture was taken during one of his high school games, where he was the backup varsity nose guard. As a goaltender, you have to do whatever you can to block the other team’s shots and it doesn’t have to look pretty. Apparently, head injuries have become such a concern that even swimming has mandated that their athletes wear helmets. Okay, so there’s “making it look easy,” and then there’s being so underwhelmed by pole vaulting 12 feet into the air that you literally yawn while you do it. 7. Did You Lose Something?

When skying over the hurdles in the Olympics, this Ethiopian Olympian just lost her shoes. But that didn’t hold her back and she went on to qualify for the Olympic final in this race. Basketball requires a lot of grace and athleticism and a macho attitude. This photo shows that even supposedly tough basketball players can look rather gentle and graceful at times. This photo was snapped during the first game of the World Series in 1991. Despite being tossed upside down, the catcher was able to hang onto the ball. 10. The King Has Arrived

In a matchup between two NBA teams, the ref on the left made the game worth watching by briefly aligning his head with the ad behind him in a pretty humorous way. He’s the king! In this photo, the Venezuelan player appears to be balancing his entire body weight on just his right hand. That’s an impressive feat. I don’t care who you are! It may take you a moment to realize what you are looking at, but this is a photo of Pittsburgh Steeler Antwaan Randle El, in 2003. His head is being turned almost all the way around as a player from the other team grips onto his facemask. The player was called for the penalty. Luckily, Antwaan was not seriously injured. This photo makes it look like the gymnast pictured has decided that a mid-air transformation into the Hulk himself is the best way to win the competition. 14. Getting Her Fish Face Ready

This diver looks like she is getting into character before she hits the water by putting on her best fish face, nonetheless. However, your facial expressions aren’t judged for the gold medal. This photo captured a split second where two professional soccer players have a look of absolute horror on their faces, which calls to question what exactly happened? Hey, coach! That’s not a seat you’re resting on, that’s an actual person! Maybe this Brazilian coach is applying a little pressure on the gymnast’s back to help her get a deeper stretch. How awkward! First, the wrestler in red tights is pointing his butt right at the lens. Then the wrestler in blue tights in the worst possible position is gazing at the camera at the right moment. This photo not only gives you an idea of the speed, timing, and agility required to be an elite hurdler but also shows you the sheer concentration needed to succeed in the event. 19. From A Different Perspective

There’s nothing quite like extreme athletes who take things that the rest of us wouldn’t dare trying even once and do them so many times that they somehow become routine. This photo captures a split second where the rider will land and immediately have to worry about the very angry bull as (hopefully) rodeo clowns arrive to distract the bull. Why, I never! Who would allow such language to be displayed not only on a basketball court but also on television in front of viewers? Why doesn’t somebody think of the poor children? 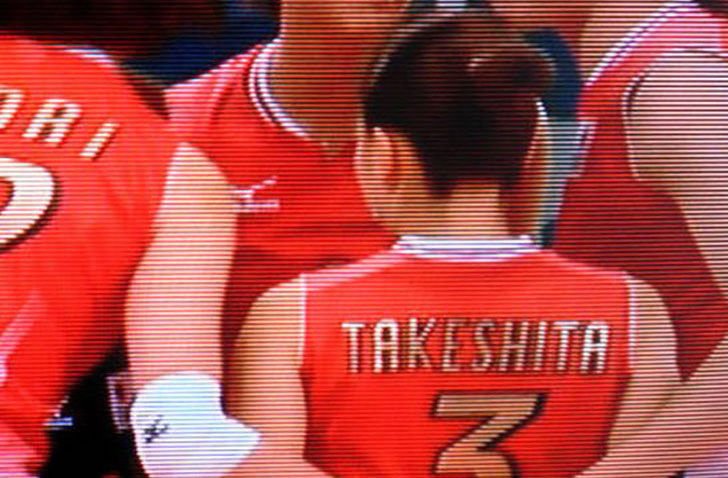 Okay, some referees are tough because they call games strictly by the rules, and then there’s this guy. I want to know what these guys did to get on this ref’s bad side. 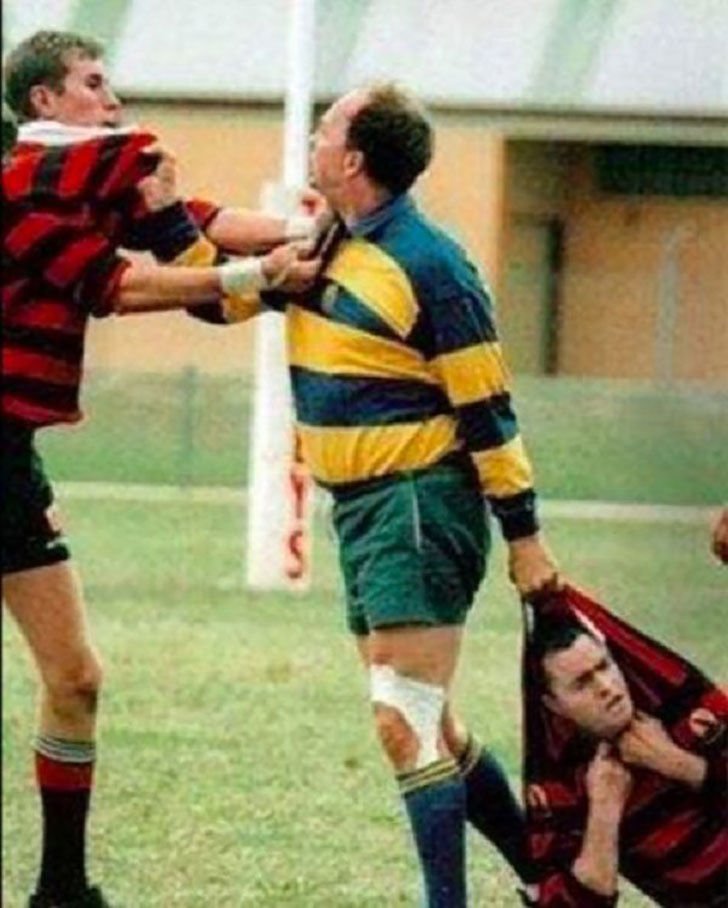 Who knew soccer could be such a wet sport? But how wet is the field that this player is playing on, exactly? 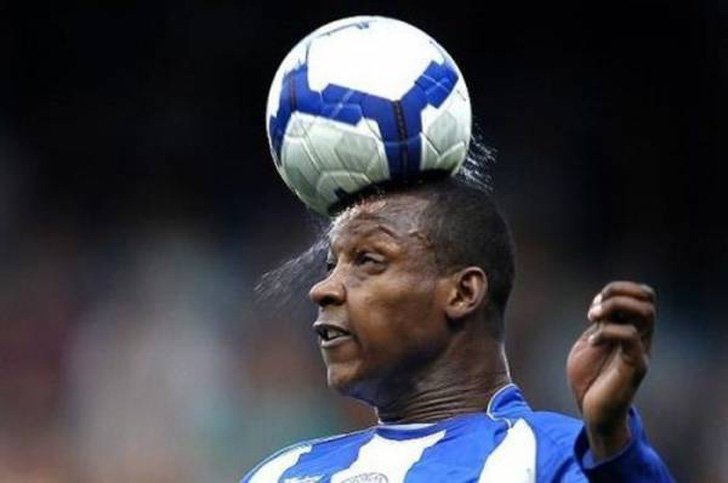 In this photo, the Canadian sprinter is thinking, “I almost had you!” Bolt, meanwhile, is laughing and saying, “Uh, no you didn’t. Not even close!” 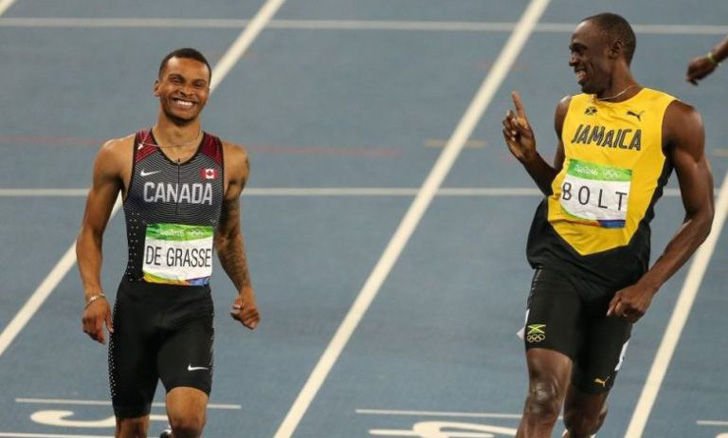 There are perfectly timed sports photos that look amazing or amusing, and then there are…well, photos like this one. 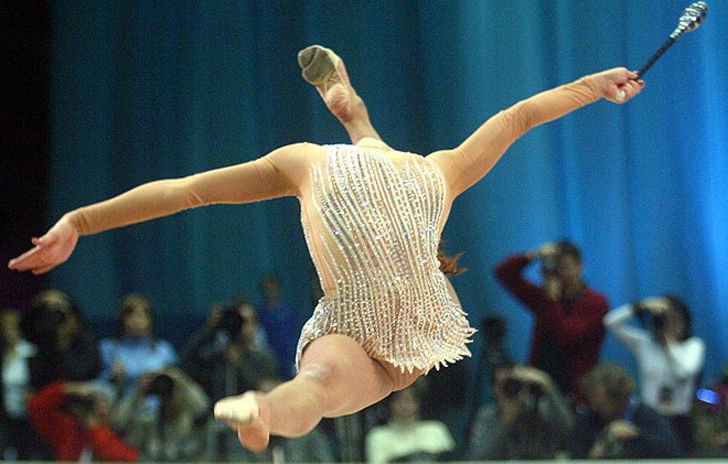 It’s not clear when this game was played, but it’s fun to imagine that it was a Halloween contest and that the Milwaukee Bucks player is just getting into the spirit of things. 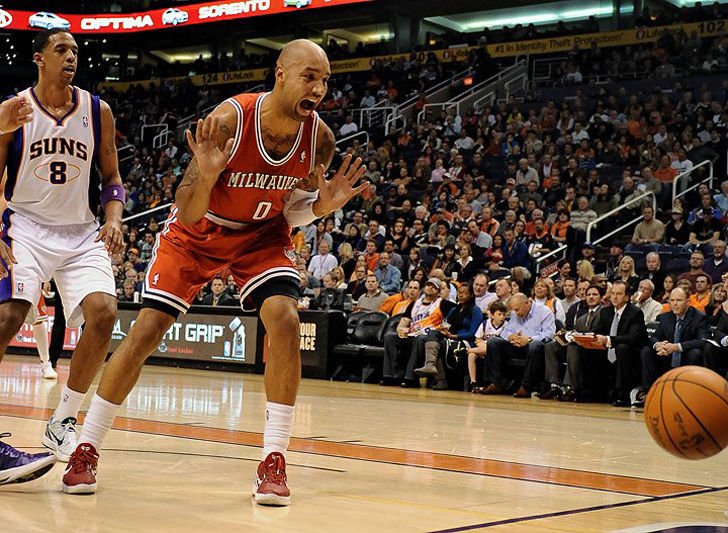