Game of Thrones has finally arrived with its final season. As the show became a cultural phenomenon, the salaries of its cast members have consequently spiked. So who is the highest-paid cast member on the fantasy drama? How much have their payments changed over time? And who has the highest net worth? We try to answer all these questions for you. The lovely British actress Emilia Clarke, who plays Daenerys Targaryen, is one of the five lead cast members on Game of Thrones. She negotiated a $500,000-per-episode salary for the show’s final two seasons from a wage of $300,000 per episode, which netted her an impressive $6,500,000, giving her net worth of around $13 million. Kit Harington, who portrays Jon Snow, is often seen as the face of the fantasy drama. Like his Game of Thrones costar, Emilia Clarke, the actor got to take home $500,000 for each episode of the show’s final two seasons. The result? Another impressive $6,500,000. As a result, Harington’s net worth stands at $12 million.

Lena Headey, who portrays Cersei Lannister, is another core cast member on Game of Thrones. Like Emilia, she also negotiated her salary up from $300,000 per episode to $500,000 per episode. However, despite making a massive amount of money for the show, Lena’s net worth is slightly smaller – $9 million – due to her financial struggles in 2013. The popular Danish star Nikolaj Coster-Waldau, the man behind Jaime Lannister, has been one of the five main cast members since season one. It just makes sense that Nikolaj was included in the show’s $500,000-per-episode deal for its final two seasons. Having been in the acting industry for many years, Coster-Waldau has an estimated net worth of $16 million. Here comes the last one of the five lead cast members on Game of Thrones – Peter Dinklage, who plays Tyrion Lannister. Naturally, Dinklage managed to earn $500,000 per episode in the show’s seventh and eighth seasons, instead of $300,000. As the only cast member to have won an Emmy, Dinklage has an impressive net worth of $15 million. Sophie Turner appears in Game of Thrones as Sansa Stark, a “Tier B” character. It only makes sense that she earns less than the previously mentioned actors. Sophie takes home between $100,000 and $200,000 for each episode she appears in. Still, she has a net worth of $6 million, which also has something to do with her roles in the X-Men movies and her lucrative endorsement deals. Like Sophie, Maisie Williams, who plays Sansa’s sister Arya Stark, is also among the “Tier B” actors earning between $100,000 and $200,000 per episode. Her salary, as well as Sophie’s for season 7 and season 8, is unclear. Along with Game of Thrones, Williams has also starred in shows like Doctor Who and the X-Men film, which altogether accounts for her $6 million net worth. Now it’s the turn of Isaac Hempstead Wright, the actor who portrays Sansa and Arya’s little brother, Bran Stark. The 20-year-old British actor was paid only $10,000 for each episode he appeared in. It may be because his character is not as prominent as some others, though Bran as the Three-Eyed Raven was a crucial figure in the fight against the White Walkers. Hawaiian-born Jason Momoa played the fearsome Dothraki warlord Khal Drogo in only one season of the show. But his performance was undoubtedly memorable and gained him incredible popularity. Outside of Game of Thrones, Momoa has starred in movies like Aquaman, Justice League and Batman v Superman: Dawn of Justice as well as TV shows like Baywatch. All of these amazing roles have enabled Momoa to accumulate a personal fortune of $14 million. The gorgeous British actress entered Game of Thrones in season 2 as Margaery Tyrell. In the novel, Tyrell is only a minor character. But considering Natalie’s incredible acting skills, the show producers made her one of the main characters. So Dormer was paid $100,000 to $200,000 per episode. Besides her role in Game of Thrones, her brilliant performances in many other films and shows including The Hunger Games: Mockingjay and The Tudors, have earned her a net worth of $6 million. John Bradley came onto the scene in Game of Thrones in 2011 as Samwell Tarly, a not so feisty character. But he still managed to help the Seven Kingdoms win the war with his intelligence. John takes home $10,000 per episode. His role as Samwell along with other TV roles in Borgia, Shameless, and Merlin have earned him a net worth of $1 million. Scottish actor Iain Glen joined Game of Thrones as Ser Jorah Mormont, a loyal servant and admirer of Daenerys. The role rewarded him $100,000 to $200,000 per episode as well as widespread popularity. His other notable roles include Dr. Alexander Isaacs/Tyrant in the Resident Evil film series, Sir Richard Carlisle in Downton Abbey, and the lead role in Jack Taylor. All together these roles have given Iain Glen a $3 million net worth.

Gwendoline Christie has portrayed warrior Brienne of Tarth in the fantasy-drama series since 2012. Whilst not a “Tier A” cast member, Christie still gets to earn between $100,000 and $200,000 per episode. She also has a net worth of $3 million, which also have something to do with her other notable roles, such as the First Order stormtrooper, Captain Phasma, in the Star Wars films. Aidan Gillen plays the conniving Petyr “Littlefinger” Baelish on Game of Thrones. His skill of making the rest of the world hate “Littlefinger” has enabled Aidan Gillen to earn between $100,000 and $200,000 per episode. Gillen has also starred in some other notable shows and films, including HBO’s The Wire, Shadow Dancer, and The Dark Knight Rises. All that has given him a net worth of approximately $4 million. Skilled fighter Sandor “The Hound” Clegane, portrayed by Rory McCann, is one of the most feared characters in the fantasy show. His acting skills earn him $100,000 to $200,000 per episode. McCann is also best known for playing Michael in Edgar Wright’s crime-comedy Hot Fuzz. His net worth stands at $6 million. Nathalie Emmanuel is the actress behind Missandei, who was introduced in season 3 and has since appeared in 34 episodes. Nathalie has done such a fine job of bringing Missandei to life and as a result, she takes home $100,000 per episode, giving her a net worth of around $1 million. Alfie Allen is the British actor who plays Theon Greyjoy, one of the most prominent characters in both the TV series and the books. Although Theon is a member of the main cast, the fact is that Theon remains part of a group of “Tier C” characters, and his salary is $10,000 per episode. With a slew of successful acting credits, Allen managed to accumulate a $2 million net worth. Amongst so many minor characters in Game of Thrones, Davos Seaworth portrayed by Liam Cunningham is perhaps the most popular one. Despite being a minor character, Cunningham’s pay reflects Davos’s true importance. The Irish actor’s wage is $300,000 per episode, and his net worth stands at $4 million. This talented actress was best known for her performances in the Harry Potter series. Playing the wildling woman Osha in Game of Thrones certainly added to her fame though. Unfortunately, we don’t know how much Tena was paid for her work on the show. But we do know that she has picked up a decent net worth of around $5 million thanks to her performance on Game of Thrones. Conleth Hill has been appearing in Game of Thrones since season one as the eunuch Lord Varys, who is a skilled manipulator and commands a network of informants across two continents. In spite of being a minor character, the Northern Irish actor still gets to earn $100,000 to $200,000 per episode, making his net worth around $2 million. 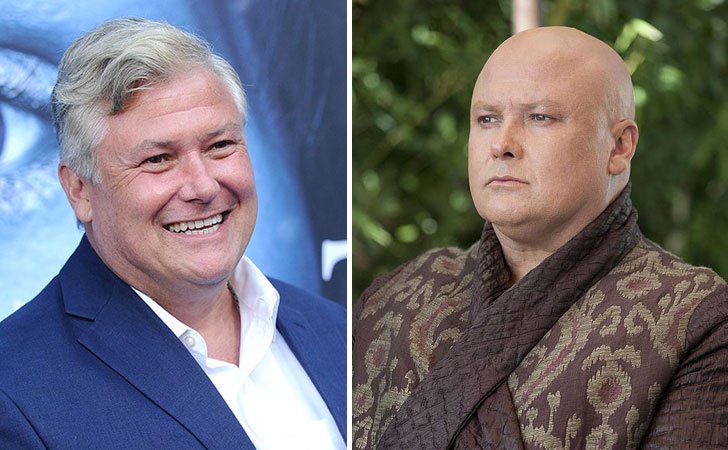