This has to be one of the funniest recreated childhood photos on our list. These two brothers looked pretty cute when they were young, but 20 years later, with the same look, the same clothes and the same pose, they look even cuter. Nothing can match the sweetness and innocence of babies wrapped up in their blankets. As you can see the recreated photo isn’t quite as affecting as the original photo, but from both we get the brotherly humor and affection.

Nearly every parent has a photo of themselves with their newborn baby sleeping peacefully in their arms. Caring for a baby is not easy at all and the dad in this photo looks pretty tired, but just look at his baby soon sleeping in his arms – it’s really sweet. Fast forward 25 years and his son can no longer fit quite as snuggly in his dad’s arms. The Most Wonderful Time Of The Year

Everyone loves the Christmas holidays, when you can reunite with your family and take cool pictures like the one on the left. Sitting on top of your family as a baby is a great joy. However, when the baby has grown up, it isn’t so much a joy for the rest of the family. Grow Up With Best Friend.

It’s so a wonderful thing to grow up with a furry friend. As we can see here, the small cuddly puppy has turned into a big cuddly dog. The photo also shows how important our furry friend is to us and how it can help shape us as we grow up together. The photo on the left shows a proud dad with his three boys, all wearing their serious Sunday best. It’s such a sweet photo that it’s no surprise they wanted to recreate it. We have to give them credit for all the details in the photo on the right, especially for the detail that the youngest brother was trying with all his might to let his dad hold him. The photo on the left shows dad on graduation day, holding his young daughter while she wears his graduation cap. This photo is touching on its own, but the recreated photo might be even better. This time, it’s his daughter’s turn to graduate and hold him. It’s awesome to see this duo’s strong bond. Little kids are wild and free, which is absolutely true of the little girl in the original photo on the left. She looks so adorable with her white t-shirt, rebellious look and of course, her dad’s oversized boots. While the recreated photo might not have quite the same effect, it sure is a cool recreation for her to look back on in the future. Babies can be entertained by almost anything. Take, for example, the laundry basket. Just look at the huge smile on this girl’s face. With a cute giggle like that, it’s no wonder this was mom and dad’s favorite photo of their daughter. Just like the laundry basket, moms and dads love to photograph their little children in small places like a mixing bowl. But they’ve gotta take advantage of their small size before they grow up. This is one of the most heartwarming photos on our list. No matter how busy this dad was, he always made time to kick the soccer ball with his kids. 60 years later, some things never change. The Airplane Game Is A Little Harder Now.

Who didn’t love playing airplane as a kid? This mom had impressive airplane skills, as she was able to lift both of her kids at once. But it is a little more difficult to do this once her kids had grown up. We don’t know why this boy made such a cute face while unknowingly being photographed, but we know that he did a great job at nailing that original look. When these three brothers took the same photo, with the same style and the same props, you can’t help but break into a smile. Feet Up, Shoes Off!

The rebellious boy in the back put his bare feet up in the car. Oh, what’s that smell? When the three grew up, they decided to recreate this funny moment. This time, his feet are bigger and probably smell worse.

When you’re young, everything is possible, for example, you can bathe in small buckets. But when you’re grown up, as you can see, that is impossible.

These three brothers have managed to wear similar outfits and replicate the same hilarious looks on their faces, as they did 20 years ago. You Didn’t Fit Then And You Don’t Fit Now!

Here are three naughty brothers squeezing into a rocking chair in memory of their childhood. We’re impressed they managed to pull off the same facial expressions. And props to the little brother who managed to wear the same sweatpants. Still Skeptical Of His Little Brother

The kid was clearly skeptical of his little brother, judging by the look on his face. Perhaps, he wasn’t ready to take on all the responsibilities that come with being a big brother. And after all these years, he still looks skeptical. A Trip To The Beach, Then And Now

Sometimes the best recreated childhood photos are not the ones with the same people, background and matching clothes, but the ones where the siblings absolutely nail their facial expressions. The youngest sister crying in this photo is the icing on the cake. One of the best things about recreating a childhood photo is seeing just how much everyone has grown up. The youngest may turn out to be the tallest in the future, like the two on the right in this photo. Though their heights have changed, it’s clear to see their playful personalities have remained the same. 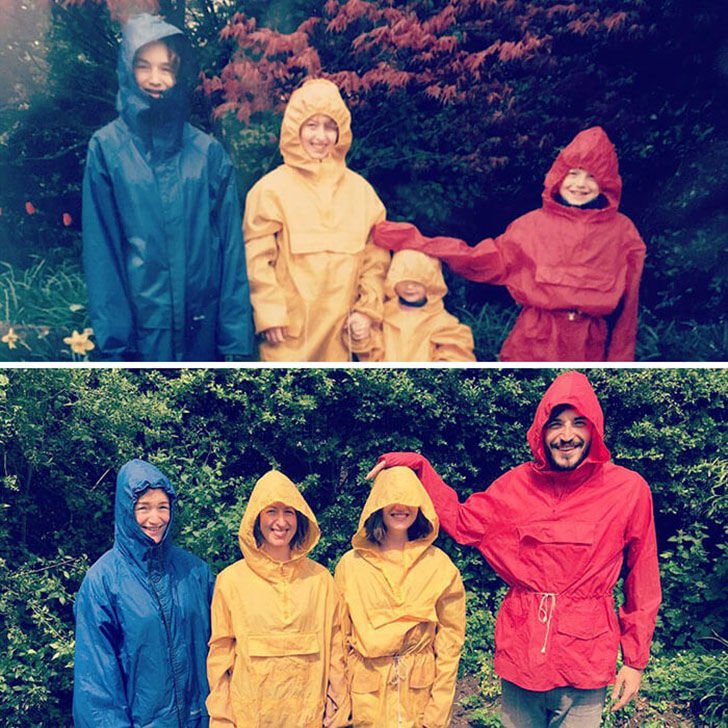