Little House On The Prairie: The Cast And Behind The Scenes

When she was only 9 years old, Melissa Gilbert beat 500 other child actors to the coveted role of Laura Ingalls Wilder. Not only was Gilbert on the television series Little House On The Prairie, but she was also in Little House On the Prairie: The Musical. Did you know Shannen Doherty played Jenny on Little House On The Prairie before her Beverly Hills 90210 days? Now in her late 40s, Doherty has become a spokesperson for cancer awareness after she was diagnosed with breast cancer and survived the battle. Michael Landon was known for playing pranks on his co-stars and staff. Sadly, after starring in NBC’s hit drama Highway to Heaven and receiving numerous honors, Michael Landon passed away of pancreatic cancer in 1991. Alison Arngrim auditioned three times before landing her character. She wrote her own comic autobiography in 2010 titled Confessions of a Prairie B***h and became one of the New York Times Best-Selling authors. Believe it or not, Karen did not have much acting experience before the show, but she did win the role of Ma with her first audition. The producer advised her to change her stage name, Gabrielle Tree back to her real name, just because Gabrielle Tree sounded way too hippie and strange. At the age of 11, Melissa beat 200 other girls for the part of Mary Ingalls on Little House On The Prairie in 1974. She has since enjoyed a solid acting career landing both film and TV roles over the years. Today, she lives in Canada with her television writer and producer husband Michael Sloan and their two children. Jason Bateman has appeared in numerous TV shows and over 40 films through his career. He is best known for his award-winning role as Michael Bluth on the acclaimed comedy series Arrested Development. In 2013, he made his directorial debut with the black comedy Bad Words, in which he also starred. In honor of the 40th anniversary of Little House on the Prairie, eight cast members reunited on Apr 30, 2014. And just like any good family reunion, there were tears, laughs and some surprising stories. Melissa had her first on-set kiss on the show. She was very young and inexperienced when shooting the wedding night scene and asked Michael Landon to keep the pair’s signs of love to simple hugs and pecks on the cheek. Michael Landon was quite obsessed with his looks and physique. Every time his character had some sort of injury, like a broken rib or an arm, he felt the need to take his shirt off to show more of himself. While filming the series at the Big Ranch in Simi Valley, CA., temperatures often rose to triple digits. Not to mention that the actresses wore periodic heavy outfits, making things far more uncomfortable. Some of the cast even passed out due to the heat. Melissa Gilbert hit puberty earlier than expected and her figure became more and more feminine. She had to bind her chest, as the script was written for a young girl. 13. Conflicting Theories About The Tension?

The rumor about the Ingalls sisters hating each other ran throughout the whole series, but it did not gain any serious consideration until their books were published. Do you think that the rumor was true, or that they just used it to hype their books? To appear taller, Michael wore four-inch heeled boots and went out of his way to stand above the ground in some way. 15. Carrie’s Fall In The Intro Was An Accident

Twins Lindsay and Sidney Greenbush took turns playing the role of the youngest Ingalls sister. When shooting the famous scene that was later used for the show’s intro, Sidney tumbled downhill accidentally. The director was charmed by the shot and decided to keep it in. Little House On The Prairie is one of the few long-running successful dramatic family shows. Though it deviated from the original books in many respects, the series remained top-rated and won 17 Emmy Awards, 3 Golden Globe nominations, along with two People’s Choice Awards. Nellie’s stunning curls were actually a wig, which was held in place by long metal hairpins that often caused her scalp to bleed. At first, Melissa and Michael were as close as they were on the set. However, after Landon left his wife of 19 years for then make-up artist Cindy Clerico, Melissa distanced herself from him and eventually did not contact him at all. It sounds too fake to be true, right? However, Walnut Grove is a pretty real place, where the author, Laura Ingalls grew up as a child. 20. Walnut Grove Was Actually Blown Up

You might not know this, but the land on which the filming occurred was rented by the show’s producers, and they had to return it when the leasing contract expired. So Michael had the idea to destroy the town during the last episode. When the family was shown dining on the stew, they were actually chowing down on Dinty Moore beef stew. Did you know, the tasty looking drumsticks in Laura’s lunch box were actually KFC chicken wings? 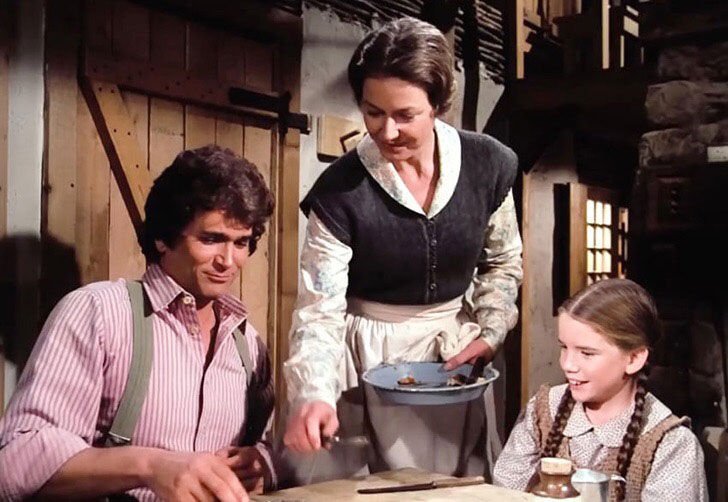