On the 20th anniversary of Princess Diana’s passing, we remember the People’s Princess through her daughter-in-law, Kate Middleton in moments where the two seem to twin in dress and expression as if living in parallel universes. This makes us wonder, is Kate as happy with her marriage as it seems? Or is she going through something similar to what Diana had experienced. The following captured moments beckon closer examination before a possible unwanted truth becomes reality. before a possible unwanted truth becomes reality. Diana: On a visit to Munich, Germany in 1987;
Kate: Attending a service of commemoration in London in 2017. Diana: In Sicily during the Royal Tour of Italy in April 1985;
Kate: At a garden party at Buckingham Palace in May 2012. 5. White dress with some unique patterns Diana: In Japan in May 1986;
Kate: Wearing Jenny Packham at a Bollywood gala in Mumbai, India in April 2016. Diana: Attending a premiere in London’s West End in April 1993;
Kate: Meeting the Prime Minister of India in New Delhi in April 2016. Diana: On a visit to the Isle of Wight in May 1985;
Kate: At Princess Charlotte’s christening in July 2015. Diana: At a dinner at the Field Museum of Natural History in Chicago In June 1996;
Kate: Celebrating Canada Day during the Royal Tour of North America in July 2011. Diana: At the Grosvenor House Hotel in London in March 1985;
Kate: At the National Memorial Arboretum Appeal at St James’s Palace in London in November 2011. Diana:Visiting Westminster in June 1990;
Kate:Visiting the Stephen Lawrence Centre in London in March 2015. 15. Red is never out of fashion Diana: Attending the passing-out parade in Surrey in 1987;
Kate:Visiting Bletchley Park in 2014. 18. Serious but lively Mazarine to suit the occasion 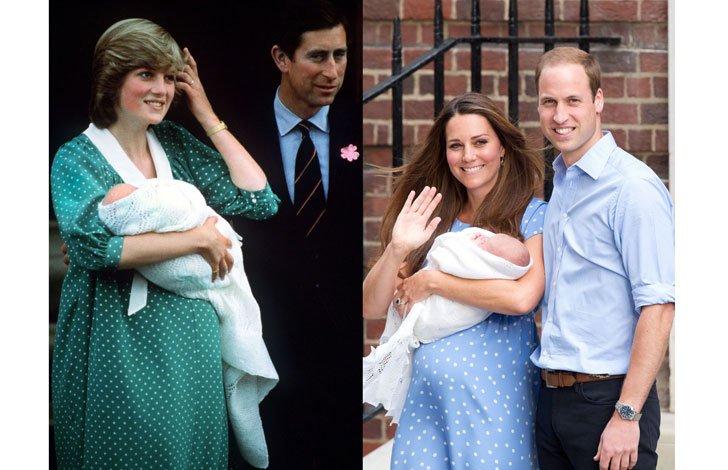