Take A Look At 25 Celebs’ Luxurious Yachts And Jets

If you were a celebrity with a net worth of millions of dollars, how would you get around? Years ago, the answer would probably be a luxury sports car, but nowadays the modern celebrity has other ideas. These 25 celebs have bought YACHTS and PRIVATE JETS of their own to announce their success and wealth. Let’s see!

The world-famous golfer Tiger Woods has earned a lot over the years due to his golfing talent and business acumen. So much so that he is able to afford his own $25 million superyacht, Privacy. Although this 164-foot mega-ship with gym, theater, and jet skis was a wedding present to his ex-wife, the maintenance cost was too high for her and she didn’t want it any longer after their divorce was finalized. In the swashbuckler film series Pirates of the Caribbean, Captain Jack Sparrow owns a ship named the Black Pearl. At the same time the actor that portrays him, Johnny Depp, also once had a yacht of his own. In 2016 this luxurious sailing vessel was bought by Harry Potter author JK. Rowling and she sold it one year later. Perhaps Rowling prefers a broomstick to get around. 3. Nicole Kidman – Spending A Happy Vacation On The Ocean With Family

So she could spend an enjoyable time on the sea with her husband, Keith Urban, and their adorable daughters, Nicole Kidman spent $2.5 million on her luxurious yacht Houkalani. It’s very roomy on board, both above and below deck, with several staterooms and twin cabins accommodating ten guests. The yacht even contains a swim platform and an integrated entertainment system. A legendary singer since 1980s, Celine Dion, has accumulated a great deal of wealth over the years. The personal transportation she chose is a Bombardier BD-700 Express costing $42 million and which also has a $3 million annual maintenance budget. Sampling delicious food made by her private chef in the fully leather furnished cabin, Dion must have enjoyed her flights. 5. Jay-Z  & Beyonce – One of The Most Luxurious Presents You Could Ever Think Of

What’s the most expensive gift you got your husband or wife? Well, the answer in Beyonce and Jay-Z’s case is unsurprisingly very extravagant. Beyonce gave the gift of a $40 million private jet for Father’s Day to her husband, while Jay-Z bought a gorgeous 213-foot yacht with amenities enough to entertain a queen: including the sundeck, a swimming pool, sauna, Jacuzzi and a helipad. 6. Tyler Perry – Renovation Fee Up To $90 Million That Is Higher Than The Jet’s Original Price

Tyler Perry, the creator and performer of the Madea character, owns a very costly private plane, which could fetch around $125 million with all necessities and luxuries equipped. He calls the plane a “Flying theater” on account of the displays everywhere in the cabin and the personal library on board. Just like John Travolta, Harrison Ford is a passionate aircraft collector, who owns EIGHT personal aircraft. Having pilots flying his collections for him for many years, Ford finally decided to go further on the way of being an aviation enthusiast – he learned to fly and became a qualified pilot himself. What a good example of devoting oneself to the hobby! It shouldn’t come as a shock that Bill Gates, as the former wealthiest individual in the world, has both superyacht and the private plane of his own. His Bombardier BD-700 Global Express, one of the world’s priciest airplanes, is used for business purposes, and his 440-foot superyacht Serene is used for spending vacations with his friends and family – It’s difficult to imagine the lives of the rich and famous, isn’t it? Inspired by portraying soldiers in films about World War II such as Fury and Inglorious Basterds, Brad Pitt bought a $3.3 million vintage aircraft in 2013. Unlike other celebs’ jets which are luxurious and comfortable to travel in, his Supermarine Spitfire with custom controls is tough to fly. For Pitt, private planes seem to be about satisfying his desire to fly, not for making his travel cozier. 10. Angelina Jolie – Enjoying Herself With Her $33 Million Jet As The Pilot

Angelina Jolie, who’s known for Lara Croft: Tomb Raider, shares a similar interest as her ex-husband Brad Pitt, that they both enjoy flying the planes themselves. Jolie’s jet of choice is the Cirrus SR22, which is much cheaper than other celebs’ jets, and it only has a capacity of 4 or 5 people. 11. Neymar Junior – An Undivided Interest On The Same $5 Million Jet

Relationship issues aside, Neymar could be regarded as a quite single-minded man, as he has two $5 million Cessna 680 private jets to his name. He also owns a helicopter and a yacht, which both sport posh interiors. However, compared to other celebrities on the list, Neymar shows less interest in jets and yachts and much more on hypercars – Maybe this star player feels better with his feet on the ground. When talking about the celebs who make their planes function as everyday transportation, you have to mention Tom Brady, the winningest quarterback in NFL history, and his pretty model wife, Gisele Bundchen. They just use it like an ordinary vehicle, one that carries them all over the world. A majority of Hip-hop stars seem to live extravagantly for some reason. Nicki Minaj, one of the most influential female rap artists of all time, is no exception. Fed up with chartering a private jet, she bought herself a $36 million Gulfstream V directly. Pretty lavish, huh? 14. Oprah Winfrey – Always Wanting The Best Of The Best And Buying A $70 Million Plane

It makes total sense for someone who makes $300 million a year and has a net worth of $3.5 billion to get a private plane. Oprah Winfrey certainly agrees. She customized her Bombardier BD-700 Express XRS, an improved version of Bill Gates and Celine Dion’s jet, to furnish it with the most luxurious decoration and extra rest and dining areas. 15. Kanye West – Biggest Private Jet In the World With An Astronomical Price Tag To Match

Have you ever thought of flying in an empty Boeing 747, which is a double-decker plane that holds up to 660 people? Well, Kanye West does and made the dream real, when he bought one as his private jet. By building in the double-bed suite, marble bathroom, lounge area, guests rooms, dining area, and so on, Kanye made it more like a moving house than a vehicle. 16. Heidi Klum – Enjoying Pizza Delivered In The Middle Of The Sea

Heidi Klum, who was ranked 2nd on Forbes’ 2011 World’s Top-Earning Models list, has a unique attitude to superyachts, that she chooses to rent instead of owning one, even though it costs almost a million dollars per week. Heidi and her boyfriend Tom Kaulitz were even witnessed getting pizza delivered while sailing in Cannes, which is an excellent way to enjoy life. What would you do if you had an extra $8,000? Well-known comedian Jim Carrey provides you a refreshing alternative option of chartering his private jet Gulfstream IV for an hour. In that way, you must acknowledge that Jim Carrey is one of the more practical celebrities. Given that Dr. Dre topped Forbes’ highest-paid musician list in 2014, it probably won’t surprise you that he owns the $60 million superyacht, Naia, which requires a crew of 22 people. The deck space is so spacious that it holds the jacuzzi, a water slide, jet skis, a gym, and even a helipad and a miniature submarine. 19. Britney Spears – A $55 Million Private Plane Of The Pop Princess

Widely known as the Princess of Pop, Britney Spears must need a form of transport with more privacy than most people. And maybe that’s the reason that she bought herself a Gulfstream G550. After all, being active for over 25 years and still having a net worth of $215 million, having a private plane isn’t so much of a big deal. Remember the famous line delivered by Tom Cruise in Top Gun? Well, it now seems more like his motto than just a line. Compared with his ex-wife Katie Holmes who has often been sighted taking New York subway, Tom Cruise chooses a faster and more luxurious way to travel. He often flies in his Gulfstream G4, one of the best private jets around the world. And there are even rumors that he owns between 3 and 5 personal planes. 21. John Travolta – Building Runways As The Path To His Home

As an aficionado of flying, John Travolta not only obtained a pilot’s license and was named an honorary pilot by Qantas Airways, but also had SEVEN private planes of his own. He even built two customized runways leading directly to the front door on his home in Florida, which made it seem like he and his family live in an airport! 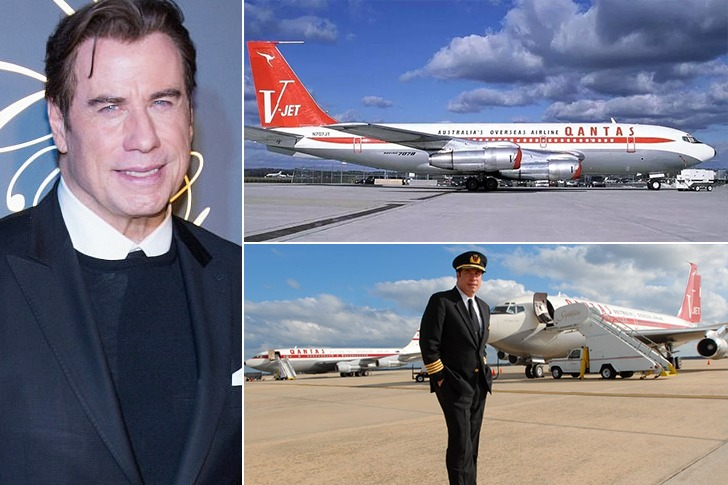 22. Michael Jordan – Having His Private Jet And Footwear In Same Elephant Print

Not satisfied with the old coating style in North California color scheme (powder blue and white), Michael Jordan repainted his private jet in an elephant pattern to match the design of his classic footwear. The tail number ‘N236MJ’ and the Jumpman logo on the empennage as his iconic symbol are a constant reminder to people of his achievements as Air Jordan. 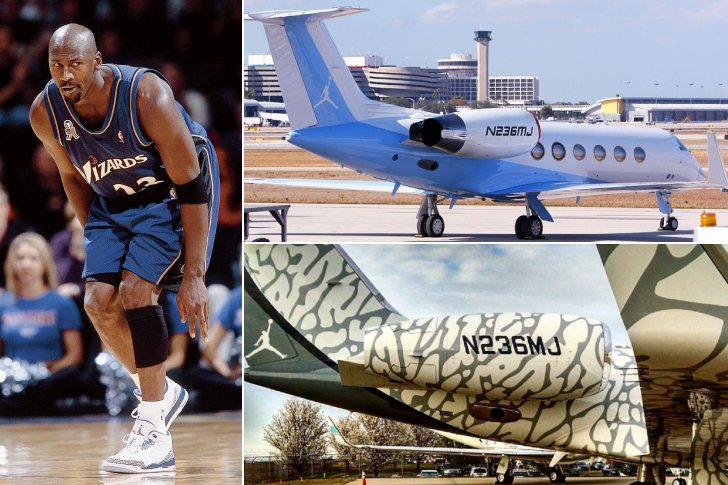 Speaking of celebrities with costly vehicles, we can hardly not mention Bono, the lead singer of the band U2, and his super yacht Cyan built by the reputable shipyard Codecasa. Bono’s vessel is 49 meters in length and furnished in a retro European style. It needs at least 17 crew members to keep it on track and can serve 15 guests. 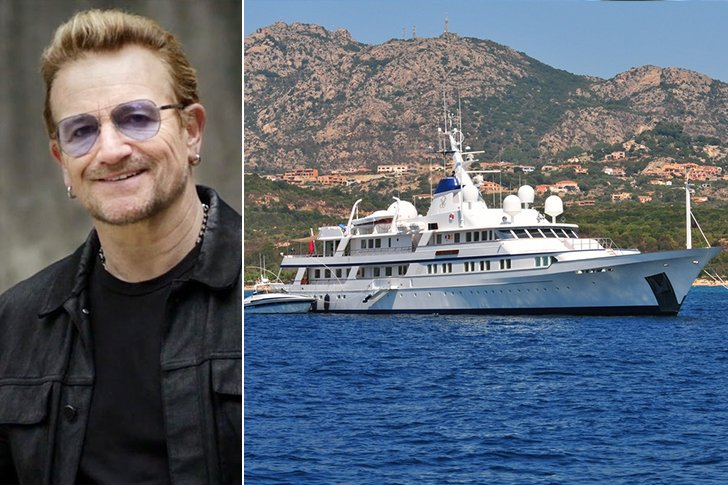 Joel Osteen, the current senior pastor of Lakewood Church, is also a televangelist whose TV sermons have quite high ratings and is the author of 10 books ranked No.1 on The New York Times Best Seller list. His successful career has brought him massive wealth and the ability to afford a $86 million Airbus A319 of his own. 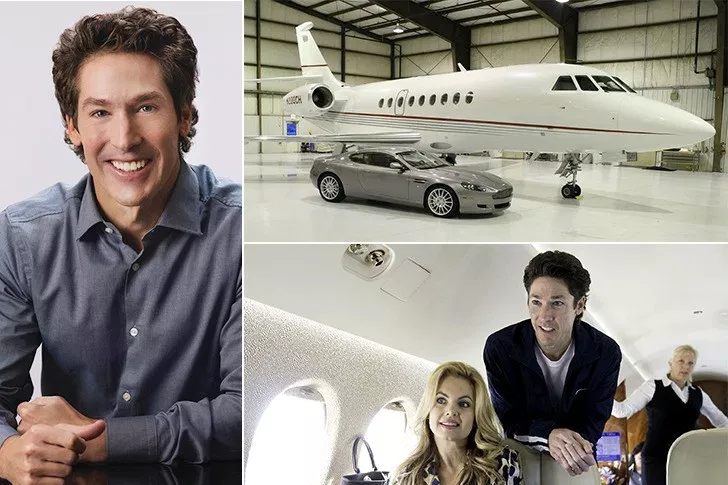 In addition to performing in action blockbusters, Nicolas Cage is also keen on enjoying himself with his guests on his own superyacht, Sarita. Equipped with a variety of recreational facilities, this yacht allows you to sunbathe, swim, dine, and even ride a jet ski. 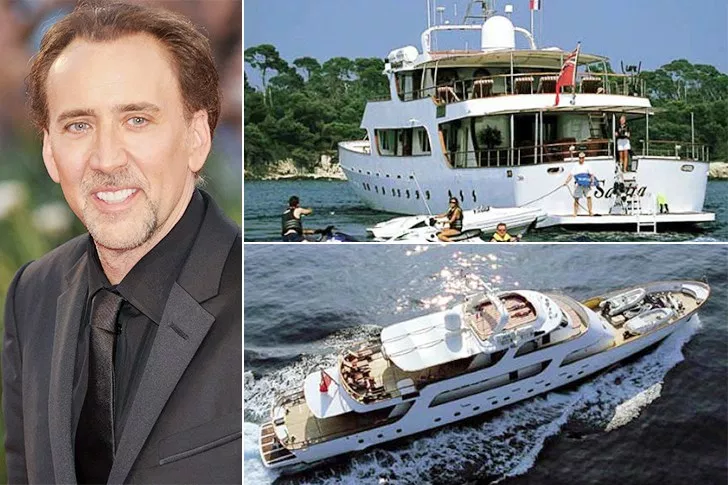