The Incredible Love Story Of Barack And Michelle Obama

Throughout these years, the former President Barack Obama and the former first lady Michelle Obama have left us lots of valuable photos. They two are a shining example of a true love that has survived 30 years of monumental ups and downs. Click through to check out how they developed strong love for each other. 1. Michelle was chosen to be Barack Obama’s mentor at a Chicago law firm when they first met in 1989. “My assumption was – this guy has got to be kind of weird. Kind of a little nerdy,” Michelle said.

2. On their first date, the couple went sightseeing in Chicago before they watched Spike Lee’s Do the Right Thing at the cinema. “By the end of the day it was over. I was sold,” Michelle admitted. 3. A couple years later, Barack popped the question at the now-closed Gordon’s restaurant in Chicago. “The waiter came over with the dessert and a tray. And there was the ring. And I was completely shocked.” 4. After dating for three years, Michelle and Barack tied the knot on October 3, 1992. “Barack didn’t pledge riches, only a life that would be interesting.” 5. In 1998, the couple welcomed their first child, Malia, and in 2001, their second daughter Sasha arrived. “Raising children alone is hard. No one ever tells you that. They just tell you, ‘Do you love him?'” 6. All the hard work paid off in 2004 when Barack won his bid for a senate seat. He celebrated with Michelle and their daughters Sasha, then three, and Malia, then six. 7. In February 2007, Barack announced his candidacy for president of the United States, and Michelle was ready to give her full support. 8. In his victory speech after becoming president, Barack paid tribute to his loyal wife. “I would not be standing here tonight without the unyielding support of my best friend for the last 16 years. The rock of our family, the love of my life, the nation’s next first lady, Michelle Obama.” 9. Though as one of the most powerful people in the world, Barack values the opinion of his wife above all others when it comes to personal matters. “Michelle is one of the smartest people I know. She is my chief counsel and adviser.” 10. The couple are making faces as the car carrying Queen Elizabeth and Prince Philip arrives at Winfield House in London, in 2011.

11. When Barack was re-elected as President in 2012, the politician shared a beautiful picture of him and his wife embracing with a message which simply read: “Four more years.” 12. Barack Obama and his wife Michelle Obama backstage before going out to face their supporters at a primary night rally in the gymnasium at the Nashua South High School on Jan. 8, 2008. 13. President Obama and First Lady Michelle Obama ride in a golf cart at an Inaugural Ball in Washington, D.C, Jan. 20, 2009. 14. President Obama and First Lady Michelle Obama’s hands rest on the railing of a boat during their tour of St. Andrews Bay in Panama City Beach, Aug. 15, 2010. 15. Barack Obama kisses Michelle Obama for the “Kiss Cam” while attending the U.S. Men’s Olympic basketball team’s games against Brazil at the Verizon Center in Washington, on July 16, 2012. 18. Michelle Obama adjusts the tie of Barack Obama as they prepare to welcome President Xi Jinping of China and Madame Peng Liyuan to a State Dinner in their honor on the North Portico of the White House In Washington on Spet. 25, 2015. 19. The first couple pose for a ‘Gimme Five’ initiative photo in the East Room of the White House, during the annual Easter Egg Roll, April 2015. 20. The President and First Lady hold hands as they listen to the remarks of Rep. John Lewis commemorating the 50th Anniversary of Bloody Sunday and the Selma to Montgomery civil rights marches on March 7, 2015. 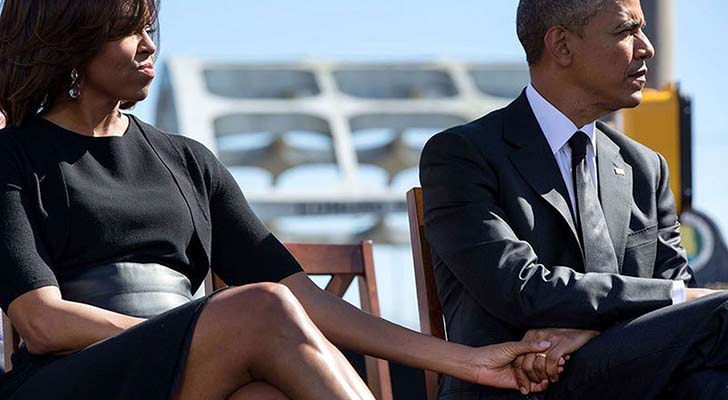 21. The First Lady snuggled against the President during a video taping for the 2015 World Expo in the Diplomatic Reception Room of the White House. 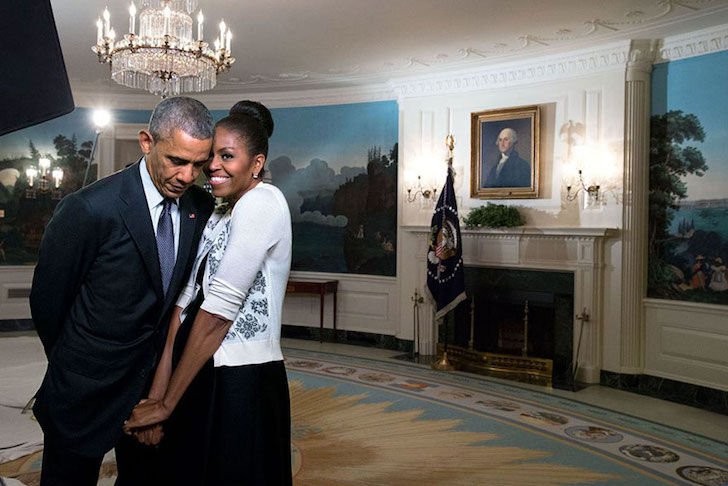 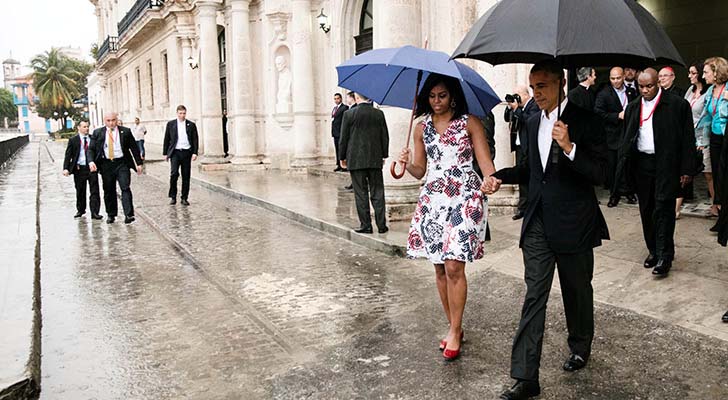 23. Michelle Obama touches the chin of Barack Obama as they await the arrival of guests at the State Dinner while participating in the U.S.-Nordic Leaders Summit at the White House in Washington, D.C., May 13, 2016. 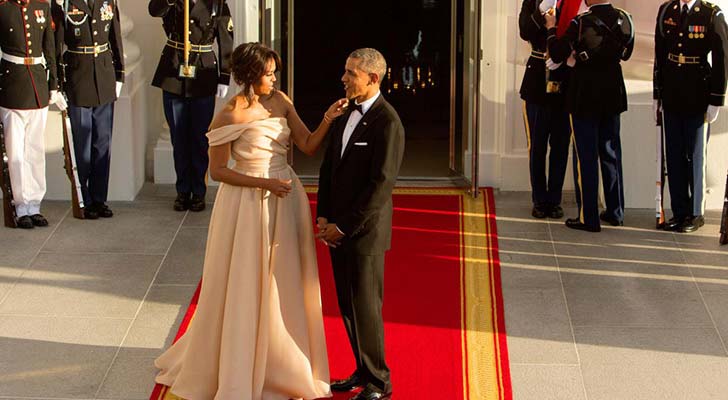