The Luxurious Jets, Yachts and Cars Owned By 24 Celebrities

These celebrities don’t cut any corners when it comes to riding in style. These Hollywood A-listers are used to travel in a customized private jet, exclusive yacht, or luxury vehicle just to go shopping for groceries. Whether in the air, on the sea, or on the road, these renowned celebrities have no problem flaunting their wealth in the form of luxury modes of transportation. Golf legend Tiger woods named his $20 million Christensen 155 yacht ‘Privacy,’ which is probably because he wanted to keep his property as private as possible. Inside this luxury yacht, you can find a theatre, jacuzzi, gym, and a bar. Privacy can host 10 guests and 9 crew members, so Woods can throw small parties without getting too crazy. Shaq made close to $300 million during his 19 years in the NBA in addition to various sponsorship deals. He put his money to good use by buying luxury mansions, a fleet of cars, and a gigantic superyacht. He even asked fans on Facebook to help him name the yacht. One of the most successful golf players, Tiger Woods, doesn’t spare his money when shopping for four-wheelers. He paid $200K for a brand new Mercedes-Benz S65. Sadly, the car was damaged when Woods crashed with it. But on the good side, while waiting for the car insurance to cover the damage, he had other flashy cars on his driveways, such as a Cadillac Escalade, a Buick Enclave, a 2001 Buick Benga, a Lexus LS 460 Sedan, and a $440K Porsche Carrera GT. With a net worth of $400 million, the former Late Night with David Letterman talk show host can afford any kind of vehicle. He has a large car collection, including a 1995 Volvo 960 Station Wagon built for him by Paul Newman. He famously showed off the car in an episode of Jerry Seinfeld’s Comedians in Cars Getting Coffee. MJ made his career from the Chicago Bulls, and now owns the Carolina Hornets. You might look at this photo and think that Michael Jordan has got himself a new private jet, but actually, he has just given his existing one a makeover! While the G550 used to be a bright blue color, it now sports a replica of the elephant print sneaker, logo and all. This is to call attention to the newest Air Jordans, and replaces the old Jump Man logo. Justin Bieber may seem like a kid, but he has money to burn, and a seriously successful music career under his belt already. He also has a ton of obsessive fans, who call themselves Beliebers! One more thing he has, a gorgeous $65 million private jet, which sits 15 people, and has a kitchen on board, as well as a top of the range entertainment system. He took his time choosing which jet he wanted, finally settling on this stunning Gulfstream. Celine Dion has had an incredibly successful career, so it’s not surprising to find her on this list, with her own private jet. It cost $42 million, and seats 14 passengers, so she can easily use it for work with her crew, or for private trips abroad with family and friends. Celine loves her fashion, and is always on trend, so it doesn’t shock anyone that she has kitted out the whole plane with designer furniture, which extends to the bathroom as well! She also keeps a very special crew member on board, her own private chef! Tom Brady and Gisele have seriously busy schedules, which do not include waiting around at the airport for estimated departure times and queueing for baggage claim! Gisele works in Paris, and her family home is in Sau Paulo, while Tom Brady works with the New England Patriots in Boston, and their own home in Los Angeles. They got themselves a $50 million jet to get around, but it’s just big enough for their family alone. Sergio Garcia is a famous golfer, and not only travels around plenty of the time for tournaments and work commitments, but also has his family living in Spain. He’s definitely no stranger to flying around the world, so it isn’t surprising that he would want to make all the coming and going a bit more luxurious. His eight seater private jet cost him $22 million, and is decorated with a complete leather interior. Lush. Beyonce and Jay Z are known for getting each other the coolest of presents, and as the King and Queen of music, with their net worth beating the billion-dollar mark, we can see why they like to treat each other! This $80 million jet was Jay Z’s father’s day gift from Beyonce, on behalf of their kids, Blue Ivy, Rumy and Sir Carter. It comes with a bedroom, kitchen, two bathrooms and a living room, making it basically a home away from home for the hip-hop artist. Jim Carey is a huge fan of everything aviation, and so it’s not surprising that one of his prized possessions is this 16-passenger jet. It cost him around $59 million, and it needs 2 crew members on board. Despite that, he goes up as often as possible considering his busy schedule. He does something a bit clever when he isn’t using it though, renting it out for a cheap at the price, $8,000 per hour! Fancy going for a trip in Jim Carey’s plane, well why not give it a go?! David Evans, also known as The Edge is a massive fan of the open sea, and so when he bought this superyacht it must have been a total dream come true. The yacht is called a superyacht because it’s almost 50 meters long, and it was made in Italy, making it look different from the other boats on our celebrity list. The Edge loves his cinema, so he has recreated an outdoor version on board, so he’s never too far away from his movies and music. Angelina isn’t just a plane lover, she’s a pilot too! She bought herself a Cirrus SR22 which is pretty frugal in comparison to many other celebrities, and cost her just $650,000. It’s not even big enough to take herself and all her kids on a family trip abroad, as it seats only five. We think it’s more for practising her flying, and perhaps heading to work and back when she has filming or philanthropy not that close to home. Tyler Perry doesn’t just have a private jet, he has a private theatre in the sky! His $65 million jet now has a customized entertainment center, including a top of the range media library and several large screens to show his entertainment. The interior is decorated with glass screens on the walls which can be controlled remotely. All of these unique changes created a pretty hefty price tag, which made the total expenditure as much as $130 million! The Bugatti Veyron has a reputation for being one of the fastest cars ever made. It’s also pretty pricey, with a no frills version coming in at $1.5 million. Birdman didn’t go for the no-frills version though, customizing it with an iconic paint job, as well as some serious personalization both inside and out. Altogether, this car cost the rapper and businessman $2.5 million, but we don’t think he has any regrets, as it’s pretty fly. Not the first celeb to sport a Veyron, but perhaps the first one to get himself one which is gold-wrapped, Flo Rida needed to part with $2.2 million to get his hands on this bad boy. But luckily, VH1 were feeling generous, handing him the cash for his birthday, and telling him to treat himself on a new set of wheels to add to his already extensive collection. The gent did well, choosing one of the most coveted cars on the planet, and customizing it with his own unique flair. The Google Jet! It’s owned by Larry Page and Sergey Brin, and is a full on passenger jet which set Google back $40 million. It seats 50 people, which includes a first class section to seat 15. As you can imagine, it’s business first on board the Google jet, which is why they also have a meeting room, as well as a dining hall for eating and working on the go. Rumors abound about Google working with NASA, as they have landing rights at Moffet field, owned by the space giants. Rupert Murdoch’s $84 million private jet pulls out all the stops, and can be totally controlled from the palm of his hand, via his iPhone! He can remotely control all of the flat screens which are in various locations around the plane, as well as change the lighting, operate the window shades, and sort his seating requirements. And it looks pretty snazzy too! The perfect plane for enjoying from your seat, with all your necessities brought to you by your private crew. Love it or hate it, Joe Johnson’s car certainly has its own iconic style, and you wouldn’t miss it if it drove you by! This was originally a Ford F650 truck, which cost him $200,000, but all the alterations and moderations have cost him more than that to complete, leaving him with a truck which is completely original from the wheels to the design. Well, when you’re a huge NBA star, you have the money to burn to show your tastes to the max. This plane seats 12 passengers, and comes with an enviably stocked bar for living it up in the sky. Neymar loves his Cessna 680 pretty fiercely, and he has a story to prove it. Once upon a time, his assets were frozen, which included this gorgeous private jet along with his other prized possessions. While he waited to be cleared under tax investigation, he took out a mortgage so that he could buy the same jet again, for another $10 million! 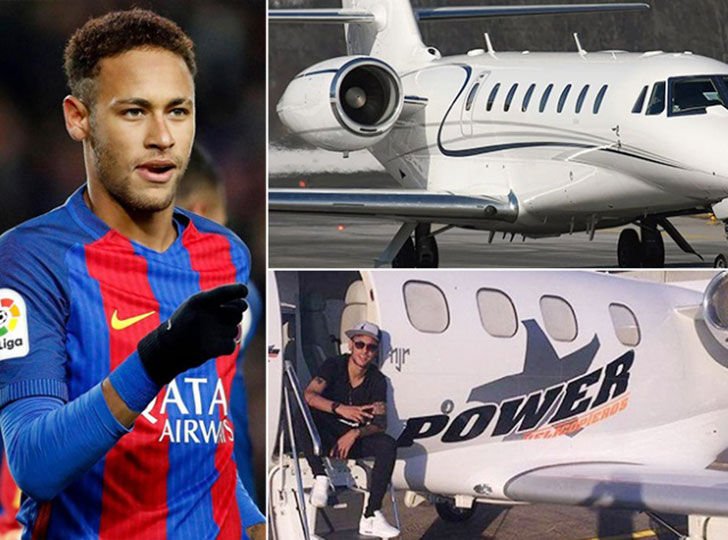 When a sports car costs $700,000, you better hope it’s pretty special. And that’s just what Jerry Seinfeld got here, when he dropped that cash on his Porsche 959. It went out of manufacturing in 1993, and was primarily a car for racing, which explains the high speeds it can reach of 197 mph. Yikes! There aren’t many roads that Seinfeld can try out that speed on, but it’s certainly an incredible status symbol, and an iconic classic. 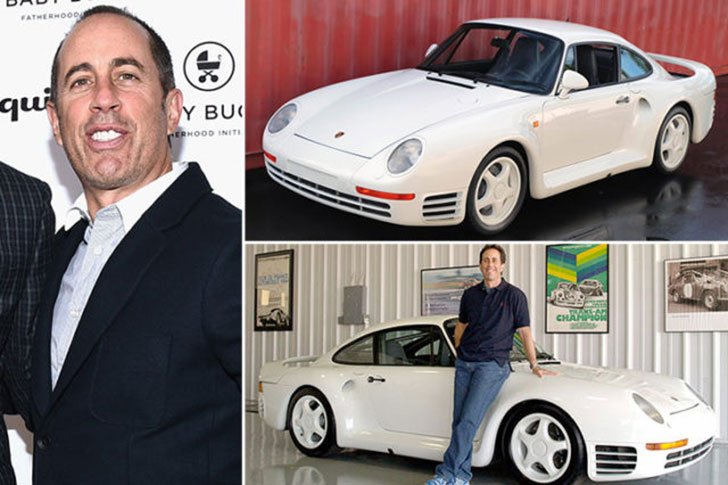 Peter Jackson is best known for movies like The Lord of the Rings Trilogy and The Hobbit. While he used to have a smaller private jet, he would often need to refuel en route to his work destinations, or on his way home. His latest purchase, the Gulfstream 3550 meant that this wasn’t necessary any more, saving him a ton of time, and giving him a place to work on board as well. There’s even sleeping accommodation for 8, so it’s a comfy ride. 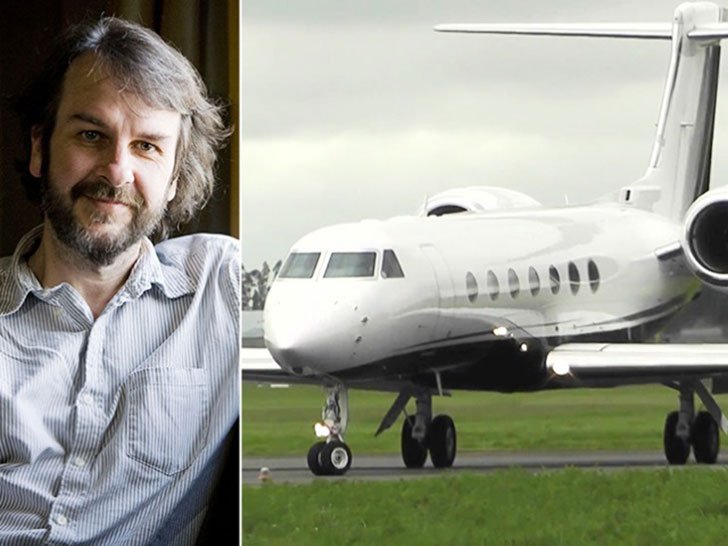 It’s a well known fact that presenter and comedian Jay Leno is a huge car enthusiast, owning more than 150 of different shapes and sizes. If you caught the show Jay Leno’s Garage, you’ll have seen many of them in all of their glory. Some of them simply sit in his garage, while others are for getting from A to B. One of his most prized vehicles is his Mercedes SLR McLaren, which cost half a million dollars, and you may have seen him driving. 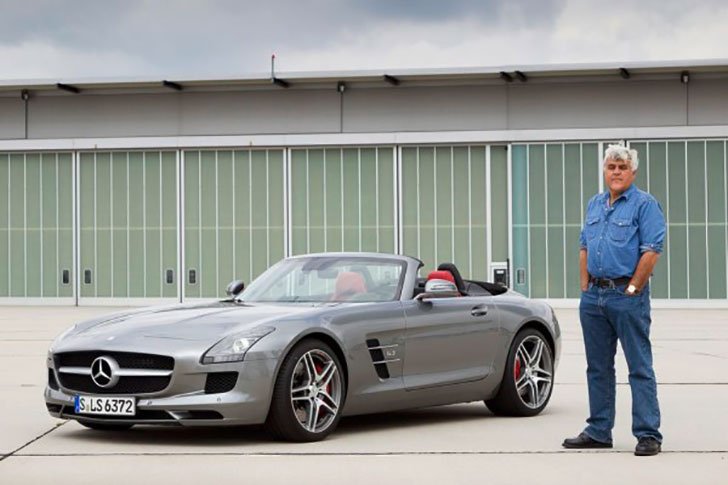 Nicholas Cage is known for blowing his whole fortune on the weird and wonderful trappings of being a celebrity with money to burn! One of those decisions which seems crazy in hindsight was to buy himself four yachts! Altogether, this was an $80 million mistake, and he realized that and sold three of them. He still holds onto one of them, which makes a lot more sense really, as who needs more than one boat?! 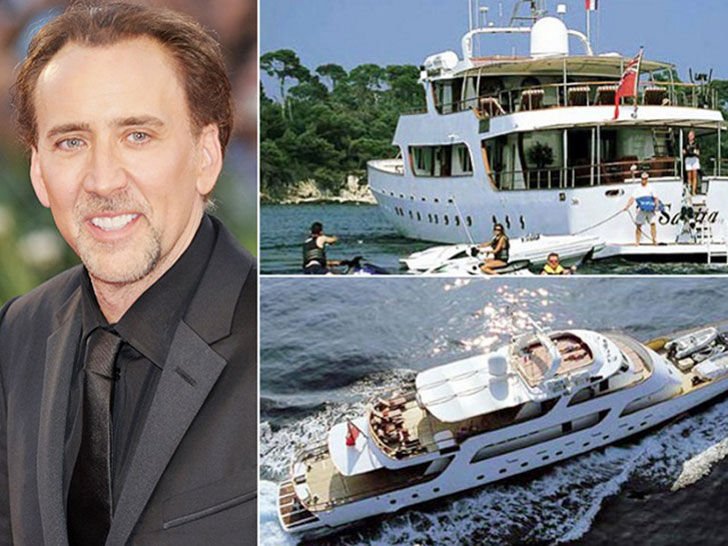