What Are Your Favorite Women Of Two And A Half Men Up To Now?

Launched in 2003, sitcom Two and a Half Men has achieved success with a seven score on IMDb and 63% on Rotten Tomatoes. Many beautiful actresses have graced the screen. As time passes, are you curious about what the women of the sitcom are up to now? In the show, April Bowlby impersonated Kandi who was set to marry Alan. But she landed a part in the show Stiffs, forcing her to leave Alan. After that, she has continued to make a name for herself in acting and appeared in hit shows including The Big Bang Theory and Drop Dead Diva. Recently, She filmed the movie Love Me or Else alongside Cindy Busby and Jon Prescott. Charlie built a connection with Courtney Leo (played by Jenny McCarthy) after his mother was set to marry Courtney’s father. Charlie bought Leo a Ferrari and gave her $50,000, but they split up at last. Jenny found fame as a Playboy bunny long before appearing on Two and a Half Men. Outside of being an actress and model, she is also an author and screenwriter. In the show, Jaime Pressly played Tammy who was the mother of three children. She is a notable actress in Hollywood and best known for playing Joy Turner on NBC sitcom My Name Is Earl. She has won one Emmy Award and been nominated for Golden Globes and SAG awards. Most recently, she has starred on the CBS sitcom, Mom. Holland Taylor played both Charlie and Alan’s mother, Evelyn. Despite being a gold-digger in the show, Holland was a big hit with audiences. For her role on Two and a Half Men, she has been nominated four times for Best Supporting Actress. She is one of the most recognizable faces in Hollywood and is now dating Sarah Paulson. In the show, Marin starred as Alan’s ex-wife Judith. The pair shared a bizarre relationship because they had to co-parent their son Jake. After Two and a Half Men, Marin subsequently starred in CBS series Madam Secretary, Homeland, and Speechless. Quite unlike her role of the crazy ex-wife in the sitcom, she has enjoyed a long and happy marriage to Randall Sommer. No one can forget Rose (played by Melanie) who was madly fond of Charlie after they spent the night together. It was sad to see they couldn’t be together due to Charlie’s death. Melanie has also starred in many other films, including Sweet Home Alabama, Heavenly Creatures, and Coyote Ugly. She married once and now is engaged to Jason Ritter. In the show, Jeri Ryan portrayed Sherri, the woman who made Charlie thought he had met his match. But Charlie quickly felt sick of her always being one step ahead of him. Jeri Ryan is also famed for her role as the Borg Seven of Nine on Star Trek: Voyager. She is now living a happy life with her second husband, chef Christophe Eme, and the pair have two children. Teri Hatcher’s role as Liz in Two and a Half Men was impressive. Liz is Judith’s sister, and she decided to hook up with Alan, which hurt her sister. Terri has had an incredibly successful career in acting and starred in shows like Desperate Housewives and Tomorrow Never Dies. Recently, she has appeared in The Odd Couple and Supergirl. Emmanuelle played dance teacher, Mia in the show. She promised Charlie a date if he could eschew meat, smoking, and drinking. But Charlie failed to keep his word, making Mia finally leave him. Vaugier later appeared in many TV shows and was once on Maxim’s “Hot 100 list.” She has recently worked on a thriller titled Masks Don’t Lie. Ming-Na Wen starred as Linda Harris whom Charlie appreciated very much. Linda had already seen through Charlie’s personality and turned his every advance down. Ming-Na Wen was not new to Hollywood, but she wasn’t in front of a camera too much. She voiced characters from Mulan and Sofia the First and is well known for her role in the series Agents of S.H.I.E.L.D. Jennifer Taylor was written into the show as Chelsea Melini. As the first woman who Charlie confessed his love for, she eventually grew tired of the playboy and left him. Taylor continued to act after Two and a Half Men, taking on guest roles on series including Shameless, NCIS, and Mom. She tied the knot with songwriter Paul Taylor and the couple have two children together. Allison Janney portrayed Beverly who was another beautiful woman in the show. Beverly met Alan on a dating website, and the two started their relationship until Charlie walked in on it. Allison was a notable Hollywood actress with an Academy Award and seven Primetime Emmy Awards.Nowadays, she is busy playing Anna Faris’ mother on the CBS sitcom, Mom. Kimberly Williams-Paisley was Gretchen Marti in the show. Alan began dating her but kept telling lies until they became too much for him to keep up with. As a result, he was dumped ruthlessly. Before Kimberly starred in Two and a Half Men, she was already noted for her role in the romantic comedy Father of the Bride. Her recent news was that she filmed in a holiday movie titled The Christmas Train. Alan thought Paula (played by Paula Marshall) was his match, but it turned out that Paula used to be a man and wanted an open relationship. Before Two and a Half Men, Paula Marshall had appeared in shows like House, Law & Order, and Murder in the First. She is married to actor Danny Nucci who once played Jack’s best friend Fabrizio in Titanic. Mandi, played by Gail O’Grady, was Alan’s mother-in-law. Alan wasn’t thrilled when he saw his brother and Mandi spending time together because he knew the two’s characteristics only too well. Gail O’Grady was nominated for a Primetime Emmy Award three times. She is currently dating Chris Beyers. Sophie Winkleman starred as British beauty Zoey Hyde in Two and a Half Men. She is likely to be one of the highest class cast members as she married royal Lord Frederick Windsor. She wasn’t affected by being a part of the British royal family and has continued to act. She has appeared in CSI: Miami in 2011 and Milo Murphy’s Law in 2016. In the show, both Alan and Shannon (played by Tammy Lauren) wanted to win their exes back with the idea of making them jealous. But they both failed. Outside of Two and a Half Men, Tammy had a permanent role on the soap opera, The Young and the Restless. Her most recent work was on an episode of Criminal Minds in 2014. Ms. McMartin (played by Maggie Lawson) was a social worker and helped Alan adopt a child. She considered dating Alan but quickly changed her mind and moved on to Walden instead. Maggie Lawson had a successful career in acting both before and after starring in Two and a Half Men. She has appeared in shows including Psych, Angel From Hell, and The Great Outdoors. In the show, Justine Eyre starred as Gabrielle who was one of Charlie’s dates. For the revenge of being stolen girlfriend, Alan intentionally tempted Gabrielle, but he finally gave up the plan. Justine Eyre has not appeared in anything since 2016. No one knows whether she will continue acting or not. Conchata Ferrell played Berta who was Charlie’s housekeeper. She appeared in every season of the show and was popular with fans. She has been nominated for two Primetime Emmy Awards for her hilarious role in Two and a Half Men. Most recently she was reunited with ex co-star, Ashton Kutcher. 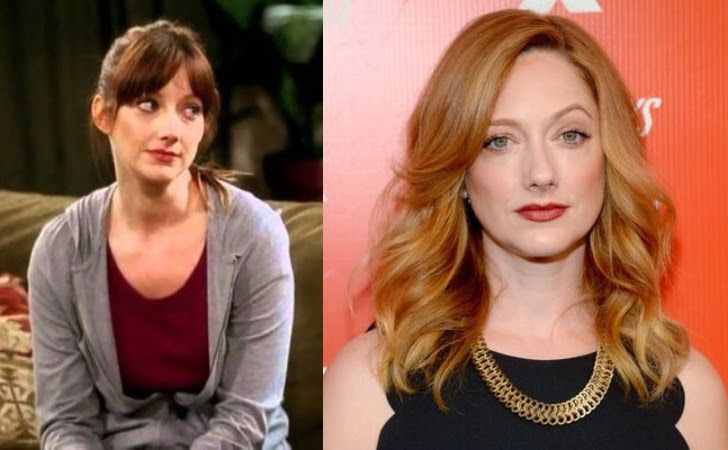 Judy Greer starred as Ashton’s ex-wife Bridget Schmidt in Two and a Half Men and became a regular on the show. She is a talented actress with a filmography that includes What Women Want, The Wedding Planner, 13 Going on 30, 27 Dresses, and Love & Other Drugs. She also released her first book, I Don’t Know What You Know Me From: Confessions of a Co-Star.